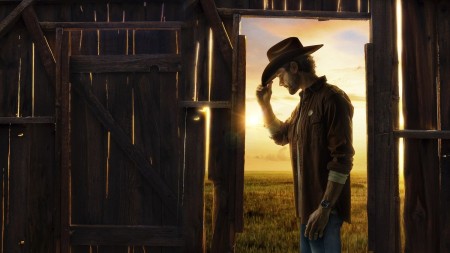 Last week, I watched the pilot episode of Walker. Yesterday, it was officially renewed for a second season. […] 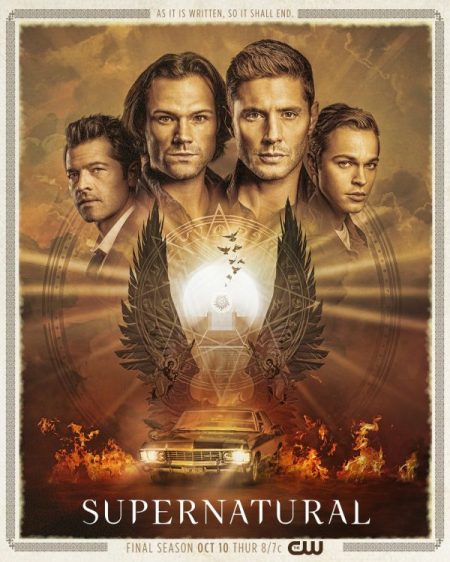 The boys are entering their final ride. An angry deity has emptied hell of all its souls, and the Winchesters are, once again, tasked with saving the world.  It’s the Winchesters’ final ride and this time, they’re up against God. MAJOR spoilers ahead,

END_OF_DOCUMENT_TOKEN_TO_BE_REPLACED

by The Collected Mutineer The day has come. We knew it would, eventually. Despite the Winchesters constantly cheating […]

Alright, fam, if you have been following us long enough, you know that we LOVE Supernatural and have done for […]

Last season saw the brothers in a battle with their biggest foe yet: the Darkness. Upon reuniting the Darkness with her brother, AKA God, the brothers were able to take a long relaxing vacation…oh wait, nope. The boys never catch a break. Dean and Sam are reunited with their mother…who’s been dead for thirty-three years. Oh and Lucifer is footloose and fancy-free (with a baby on the way!) Spoilers ahead.

END_OF_DOCUMENT_TOKEN_TO_BE_REPLACED 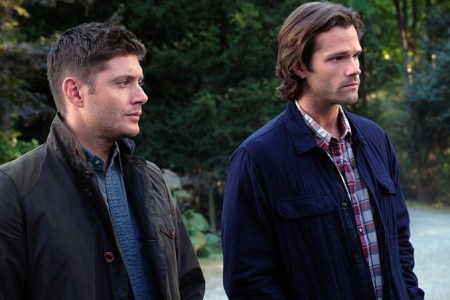 Last weekend, as an early Christmas present to ourselves, the Mutineer and Collectress headed up north to San […]

If you’re not part of the Supernatural fandom, the acronyms in this title probably mean nothing to you. However, although they’re part of a movement in one fandom, what they represent could benefit members of all fandoms. Here is some enlightenment: “AKF” stands for Always Keep Fighting, and was/is the name of actor Jared Padalecki’s campaign to raise funds and awareness for battling the stigma against mental illness. The movement is almost a year old, and since its conception it has raised many funds and much awareness for organizations like To Write Love On Her Arms. The movement has been widely embraced by the fandom, and during San Diego Comic-Con last year, we showed Jared how much both he and AKF mean to us.

The fans show their support for #AlwaysKeepFighting by holding candles #SDCC pic.twitter.com/24u6aZVwhW

Last week, fellow Supernatural actors Jensen Ackles and Misha Collins supported their castmate/friend’s mission to help fans who struggle with depression by launching You Are Not Alone, or YANA, via the Creation Stands website.

I’m usually not happy this close to Misha but I am happy with this #YouAreNotAlone project https://t.co/oeTTmXvmyc pic.twitter.com/i6v0YZvYwa

The funds raised by YANA will support a new project; the two actors have also decided to create the #SPNFamily Crisis Support Network in conjunction with Misha’s charity Random Acts and also with IMAlive and To Write Love On Her Arms. The goal? To help fans who suffer from depression, addiction, and self-harm.

END_OF_DOCUMENT_TOKEN_TO_BE_REPLACED

You all KNOW how much I love Jensen Ackles and when, on August 24, 2014, the actor, father and all around grumpy old man joined Twitter, he opened up his world to fans and allowed us to get a glimpse into his life. His hashtags are hilarious, he gets mad at the internet, and, hey kid, you’d better get off his lawn! In honor of Jensen’s one year Twitter-versary, here are my all time favorite tweets from Old Man Ackles (in order).

p.s. This post is dedicated to Jams, who’s having a crappy day. Go say hi and show her some love ❤

He’s a musician. He jams. in the a.m. wearing sleeveless shirts! Yeah, guys, this is the first week Jensen got Twitter and I think the fans knew we were in for a bunch of really great selfies. 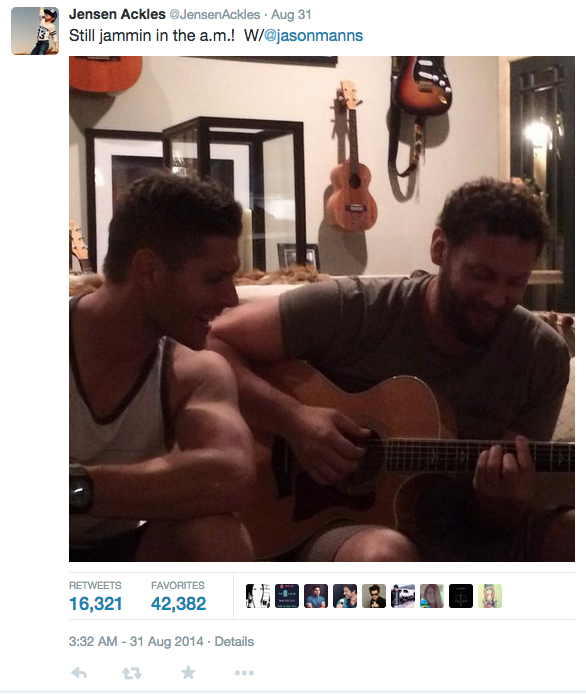 9) Live tweeting with Misha and Jared the 200th episode

The interaction between Jensen, Misha and Jared is fun to watch on screen and off. And Jensen? You are absolutely that type of girl.