Warning: General Ramblings and Spoilers for a 152-year-old plot ahead

When I was a child and teen, I idolized the character of Jo March. Honestly, I still do. She was everything I wanted to be as a young writer, and I felt as though she had been written just for me. In her, I met a comrade. I saw someone who not only wanted to make a living writing stories, but who was opinionated and feisty and often scolded for not acting the way a “lady” ought to act.

A thousand (a million) other women feel the same way. Just read a few author’s notes or Tumblr posts, and you’ll see what I mean. Jo March inspired generations of women to follow their dreams and be unafraid of facing the world’s challenges.

So why is this story still important? A lot of people in my life asked that question when news of the 2019 film started circulating. “Haven’t they made this movie like five times already?” they would complain.

Greta Gerwig’s Little Women is actually the seventh time this classic story has been brought to the big screen—and while you might think that we don’t need another version of a civil war era book, this adaptation breathes new life into the characters. This take on what some believe is a cliche story proves that not only was Louisa May Alcott ahead of her time but that the story of women struggling to find their place in the world is not over.

The film plays with the timeline of the text, which is a refreshing way to jump into the story of the March family. We begin with Jo (Saoirse Ronan), the second of four sisters, living in New York City in 1868. She is a struggling writer, who has had a few pieces published but cannot achieve success in a male-dominated field. She longs to tell fantastic and dramatic tales but is frustrated by the critiques of editors and friends alike. When a fellow boarder and friend, Professor Bhaer, criticizes her latest story in the hopes that she will work to improve it, she takes offense and breaks off the friendship.

(Feel seen yet, fellow writers? Remember to kill your darlings!)

Accompanied by a beautiful musical score, impeccable craftmanship in set design, and lovely cinematography, we journey back to 1861 after Jo receives a letter that her sister Beth (Eliza Scanlen) is in poor health and near death. In the past, we meet all the sisters (Meg, played by Emma Watson, and Amy, played by Florence Pugh) as well as Marmee (Laura Dern), the Lawrence family next door, and a handful of other characters. The Civil War had just begun earlier that year, and the March family is struggling to make ends meet. Despite this, they are better off than other families in town, and Marmee strives to share what they have with the less fortunate. 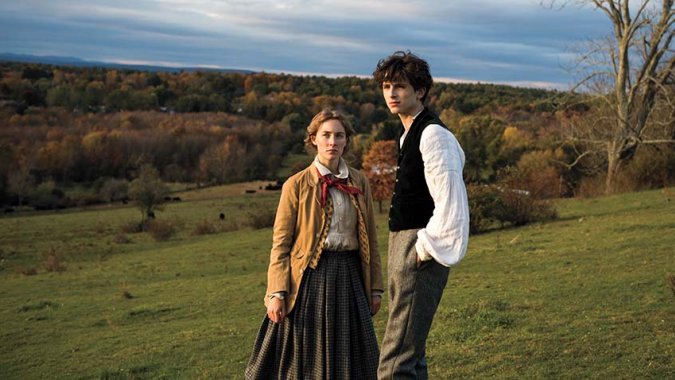 Jo and Theodore Lawrence (Timothée Chalamet)—Laurie to most, Teddy to Jo—develop a fast friendship, and he becomes an integral part of not only the sisters’ social circle, but of their family as well. As we jump back and forth between the two timelines, we learn that Teddy fell in love with Jo, but she rejected his offer of marriage because she views him as the brother she never had.

These complex relationships between the sisters and the outside world are inextricably intertwined with themes of financial independence and agency in a world that is often unkind to women. It is made clear (more so than in any previous adaptation) that marriage is not only expected of women but necessary to their wellbeing. For many, marriage meant security and a roof over one’s head. Society was structured around strict gender norms, and it was exceedingly rare for a woman to make her own way in the world without a husband. Aunt March (Meryl Streep) is a notable exception because she’s rich. Jo, on the other hand, envisions a reality where she and her sisters never marry but not because they have inherited wealth—Meg would be a self-sufficient actress, Beth a successful musician, Amy a sought-after painter, and Jo? Well, Jo would obviously be a published author.

I could continue to recap the plot, but we all know what happens at the end, right? The story has received harsh critiques in the past by fans and literary critics alike because of Jo’s OOC decision to wed Professor Bhaer. But the ending of this film took me by surprise. It’s somewhat ambiguous, and up for interpretation. The audience watches as Jo concedes to marry off her main character due to the pressure of the publisher. Her reunion with Professor Bhaer is cut back and forth with her proud observation of the printing of her first copy. So, is marriage the real ending for Jo? Or is it a not-so-subtle homage to real author Alcott who made that very real concession in order to get her book about four young girls published?

I guess, in the end, it’s not just a story about a family—it’s about how the world can be changed by a girl and her book. Thanks, Louisa May Alcott.