The boys are entering their final ride. An angry deity has emptied hell of all its souls, and the Winchesters are, once again, tasked with saving the world.  It’s the Winchesters’ final ride and this time, they’re up against God. MAJOR spoilers ahead,

The Hellatus has ended, and our boys have jumped out of the frying pan and into the fire, so to speak. This episode, written by Robert Berens and directed by Robert Singer, picks up immediately where the midseason finale left off. When last we saw the Winchesters & co., Sam and Eileen were tricked and trapped by a pissed-off Chuck, and Dean and Cas were given two free tickets to Purgatory, courtesy of Adam/Michael.

Chuck takes Sam and Eileen to that weird af casino where he reveals that he planned and plotted their developing relationship. Sam and Eileen look equally devastated to know that their kindling romance may have been more predestined than not, and Chuck uses their feelings for each other to twist the knife again, quite literally. The Almighty is convinced that Sam’s wound isn’t healing–and thereby his wound isn’t–because of some emotional stopper. Sam’s holding onto something that’s keeping the wound open, and Chuck is going to dig until he finds out what it is. Or, more realistically, he hands Eileen a scalpel and makes her dig for it.

When brute force appears ineffective, Chuck resorts to psychological methods, showing Sam a very bleak version of the future–a future in which the Winchesters win and succeed in removing God from the universe. There is no happy ending to this story, Chuck implies, and after Sam is forced to watch he and his brother die at the hands of Jody and Bobby (yeah, I am going to ignore the vampire thing because it was weird af), Sam is inclined to agree with Chuck. But more on that in a minute. 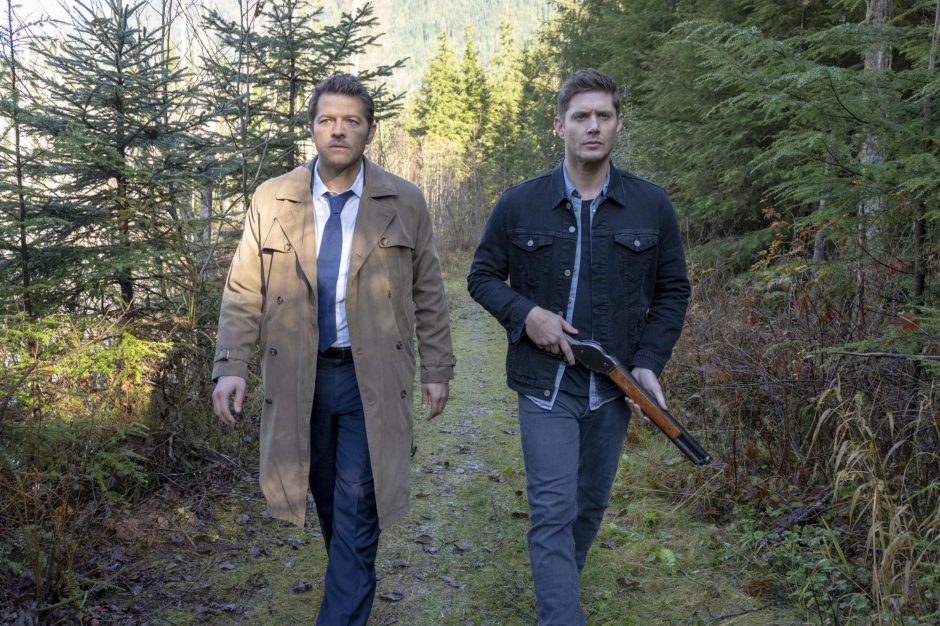 Meanwhile in Purgatory, Dean and Castiel are looking for a Leviathan blossom (yeah, it’s just as ugly as it sounds) but, thanks to a super-helpful Leviathan that they captured, apparently it only grows out of rotting, almost entirely decomposed, Leviathan corpses.

Since the doorway to Purgatory is only open for 12 hours, Cas and Dean try to put their differences aside so they can get the ugly-ass flower and GTFO. Except, tensions are still a little high and finally Castiel calls Dean out. “Why’d you let me leave?” he asks Dean (Okay I’m paraphrasing. Siri, remind me to upgrade to a photographic memory.) Unfortunately, their making up is interrupted by Castiel being trapped and abducted by Leviathans who are keen on collecting the bounty that Eve has put on the angel’s head. Dean is knocked unconscious, and when he comes to, he finds Castiel missing and no Leviathan blossoms. What follows Dean’s initial panic at the apparent loss of his best friend,  and it’s a significant moment for Dean’s character development and his relationship with Castiel, and, well, it’s best if you watch and experience it for yourself.

this was so pure, so raw and full of emotions so i removed the background music which makes it like a thousand times more painful, you’re welcome pic.twitter.com/a8tjZZELjt

Castiel escapes the Leviathan and gets the blossom and returns to Dean . They create the spell to seal Chuck in the Empty, and then go to the weird elephant casino to save Sam and Eileen and… it’s a fail. After seeing the probably future, Sam won’t seal Chuck away and Chuck just…lets them go?

Oh, and Jack’s back.

What’s going to happen with Eileen and Sam? 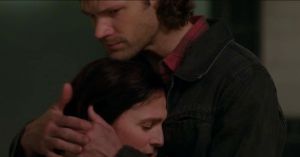 Well, Saileen shippers rejoice, because our ship sails! But…the two are separated for the time being, after discovering that Chuck kinda of put them in each other’s way and planned their romance. It seems that both Sam and Eileen believe that their feelings for each other are real, but, of course, would it be a show about the Winchesters if there wasn’t a little bit of self-sacrificing angst?

Also, in the future that Chuck showed Sam, there was a brief moment of happiness and contentment with Eileen, followed by tragedy and heartbreak. I consider it quite likely that Sam will not seriously pursue a relationship with Eileen until he knows that he has done everything to prevent that possible future from happening.

Actually, let’s talk about Chuck’s version of A Future Without Chuck. It’s dark and bleak and almost definitely manipulated to f**k with Sam’s mind. Chuck wants Sam to lose hope, because by doing so their shared wound will somehow heal (not sure about the metaphysics of that…but hey it’s Supernatural) and, presumably, Chuck believes that he can’t be beaten if he’s at full strength. Let’s assume, for the moment, that Chuck is right; they can’t kill God or lock him away in the Empty or December 9, 2022 will indeed become the end of the line (but really? Vampires? Chuck’s version of the future is ridiculous).

Where, then, does that leave the Winchesters?

So, what comes next?

According to Chuck, all the visions that Sam has been having this season were “drafts” or, other versions of Sam and Dean from other universes. This time, however, Chuck is intent on getting the ending “right” and he doesn’t much care if it’s a happy one (pun…not intended but fully appreciated). In Chuck’s version of a future without himself, we have seen that a Dean and Sam without their loved ones–without Cas or Eileen or Bobby or Claire or Donna–is a Dean and Sam that are defeated.

The days of the two of them against the world are over. The boys need the entire Winchester family, especially if they have any hope of beating Chuck.

So, what do you do if you can’t trap or kill God without dire consequences? Does the universe need Chuck to maintain the balance?  Chuck would have us believe so, but I’m inclined to believe that God can be replaced by another powerful supernatural entity, transferring the responsibility of balance in the universe to someone extremely powerful like, say, Amara or Jack. …or…this one’s a stretch but what if they transferred God’s powers to Adam/Michael? They kinda owe the dude for leaving him in the cage for a decade…just sayin.