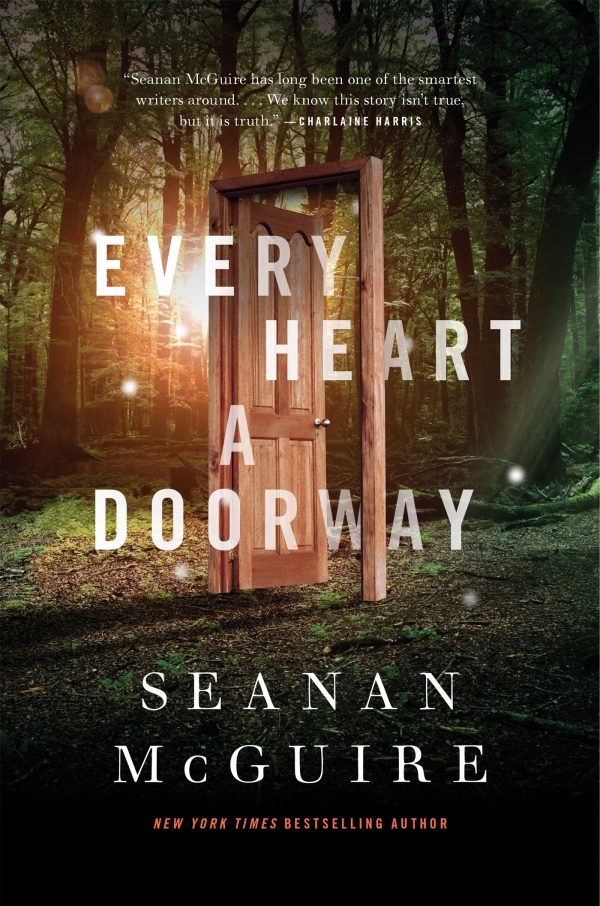 When I was a child, I would always be looking for mysterious paths on camping trips, or secret passages in unfamiliar houses. I wanted to find—if not an entirely different world—something out of the ordinary, and secret. Fiction where characters do enter other worlds is generally called portal fantasy, and the most well-known example is probably C. S. Lewis’ Chronicles of Narnia. Four siblings crawl into another world through the back of a wardrobe, and have marvelous adventures. However, what happens when children come back from their worlds, wanting to go back and unable to?

That’s where Eleanor West’s Home for Wayward Children comes in, from the Wayward Children series of novellas by Seanan McGuire. Eleanor takes care of the children who come home to parents who don’t know what to do with them. Parents generally don’t believe in the other worlds, but Eleanor does. She herself also went to one, and is waiting to return. The four novellas (so far) cover events at the school (#1 and 3), and serve as prequels to explain backstory for characters (#2 and 4). The first story, Every Heart a Doorway, introduces us to Nancy, who went to an Underworld, and the reader gets to know Eleanor, her deputy Lundy, her nephew Kade, and assorted classmates who have all been and returned from other worlds.

Every world has some kind of door, whether it functions as an actual door or is simply more of an entryway. Twins Jack and Jill enter their world, the Moors, through the lid of a steamer trunk, with steep stairs that lead down, for example. Generally, there is a moment for the child in question to really think about whether they want to continue before going on. For example, the stairs in the trunk go on for a long time, but the narrator makes it clear that the promise of adventure drives the two girls onward. In both of the prequel stories showing how Jack and Jill (book 2) and Lundy (book 4) ended up in and out of their worlds, the narration and tone is cynical and adult, as opposed to light and humorous as it might be in other series, like Lewis’. The narration makes it clear that even if these are fairy tales, they are not happy, and there won’t be much true heroics for these characters.

Virtue, Nonsense, Logic, and Wickedness are the four cardinal directions that Eleanor and Kade believe make up another world. They also tend to go together: Logic with Wickedness, and Nonsense with Virtue. Throughout the series, they try to map out the worlds on this compass rose. This method forces the reader to think logically about this fantasy concept, and expand it as well. There isn’t just one other world, there are hundreds, and these children have all gone to different ones with different rules.

The Wayward Children novellas, despite featuring teenagers, are for adults. As a consequence, both of the prequels are essentially tragic in their endings, and the series as a whole has a cynical, grown feeling to it. Even if adventures happen, they happen for a reason, and crowns are not given out for the sake of them. There are consequences in every story, and the children who enter other worlds for years are truly shown to change. Whether that change is for the better depends on who you ask.

Portal fantasy is an old concept, kept alive in real life by the scant possibility that there could be something secret, just around that bend in the road. Wayward Children updates the portal fantasy into something more adult and logical, and therefore, less innocent. These children have seen their true homes, and now they are forced away from them, back to the places they came from. Sometimes there is a reason, whether it makes sense or not, and sometimes there is no warning whatsoever, and they are forced to contend with the real world once again.

Noemi Arellano-Summer is an arts and culture journalist currently working in the Boston area. She has experience as a writer, editor, copy-editor, photojournalist, and arts critic. She is passionate about arts, history, culture, entertainment, film, and literature. You can often find her roaming through a bookstore or working on her novel at a cafe.