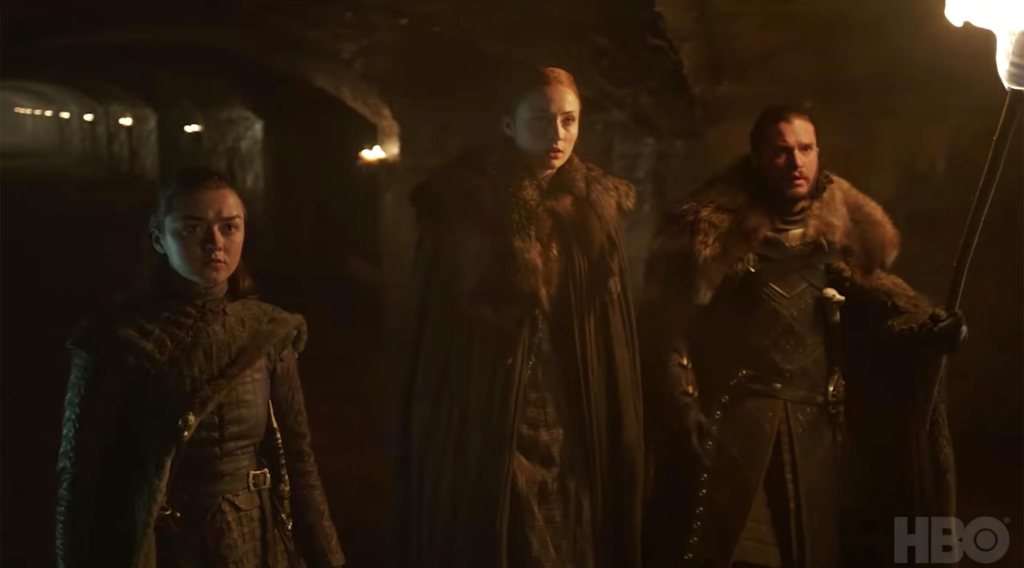 The first Game of Thrones season 8 trailer was dropped just a few hours ago, and it’s sent the fans into a tizzy of excitement and, more realistically dread because it has heavy subtextual clues for the final season. If you haven’t seen it yet, watch it now before I launch into discussing all the things that may be hinted at in this short 1:44 clip.

Okay, I’m going to be as spoiler-free as possible, in case you haven’t caught the latest season, but let’s just say that after years of speculation, Jon Snow’s parentage has been revealed in the show to some of the key characters. In the trailer, we see him walk by Lyanna Stark’s grave and a feather floats off of the memorial. It seems to be just a bit of cool cinematography…but it’s really so much more.

That feather was placed there in the pilot episode of season one by Lyanna Stark’s former boyfriend(? or just hopeful boyfriend?), Robert Baratheon.

We see the feather next in season 5. Sansa and Littlefinger have a very…revealing conversation in the crypt in front of Lyanna’s grave. I don’t want to give spoilers, but if you rewatch those scenes from the pilot and season 5, you’ll probably figure out some pretty strong hints of one of the two major conflicts that’ll be happening in the final season.

The end of house stark?

In the trailer, we see Jon, Sansa, and Arya approaching from different directions–a symbol of the varying journeys they’ve been on over the past several seasons–to arrive in front of three effigies. Three memorials that look like them.  I mean, exactly, like them, down to Sansa’s necklace that she wears in the trailer.

This could indicate death for the Stark siblings, but more likely, it’s the death of House Stark as we know it.

Noticeably absent is Bran Stark, which in a Stark-heavy trailer, is surprising. Last season brought a very different Bran back to Winterfell, and I think that this trailer indicates that the only “true” Stark son left doesn’t really think of himself as a Stark anymore.

Perhaps the death of House Stark is going to come because there will be no Stark men left to carry on the name.

At almost the end of the trailer, we see frost overtaking this long-suffering feather that Jon’s epic cloak-swoosh made float to the floor. The feather is a symbol of all the inter-house strife that has made up the majority of story arcs over the past seven seasons. The frost represents the Night King, and how he doesn’t give a flying rat’s ass if you’re Targaryen, Lannister, Tyrell, or Stark–he’ll kill you because winter is here.

We here at The Collective have a lot of GOT feels, and needless to say, we’ve got even more feelings about the final season which now has an official premiere date. So, mark your calendars and fill your wine cups, because on April 14, the end has arrived.

Are you a GoT fan? Tell us your season 8 hopes and fears!