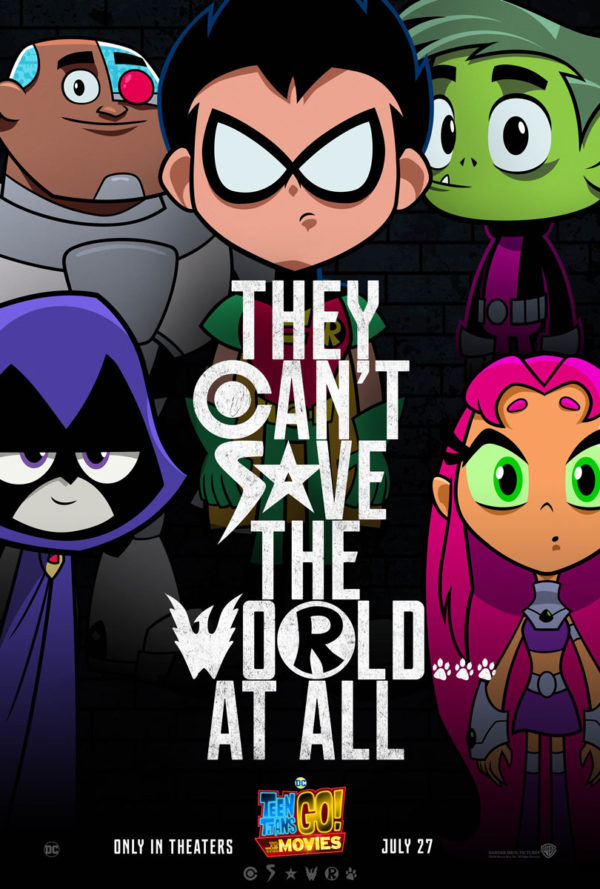 While I know most of us prefer the original Teen Titans animated series which had five awesome seasons on Cartoon Network (and *MINOR SPOILER* is teased to have a sixth season coming during the mid-credits of this movie), I actually enjoy Teen Titans GO!  The replacement series geared towards a much younger audience has been my go to for an easy laugh.  With adventures like getting a job at a pie shop – in which customers are baked into the desert – to buy their best friend a present on their birthday, going to evil prom, or doing laundry, these teenaged superheroes make for a great counter to the overly serious nature of the DC movies and angsty CW TV shows.

Robin (Scott Menville), Beast Boy (Greg Cipes), Starfire (Hynden Walch), Raven (Tara Strong), and Cyborg (Khary Payton) want to be taken seriously by other superheroes.  They figure the best way to be seen as more than just sidekicks is to have a movie made about them.  Just one problem.  The Teen Titans may have a badass introduction song for when villains don’t know who they are, but don’t have an arch-nemesis.  All heroes need a big bad in which they must battle until the end of time.

Enter Slade (pronounced SLLLAAAAAAADE, because you must pronounce all baddies names all drawn out and ominous like), who is absolutely not Deadpool.  The mind manipulating villain has a plan to take over the world and the only thing stopping him are the Teen Titans.  All of the other heroes are too distracted with filming their latest movie where they bond over shared names of their mothers, but then become mortal enemies when they realize their fathers don’t have the same names.

Teen Titans GO! To the Movies is a long version of an episode and very much a movie for younger kids.  This is no Pixar film.  Packed with the twisted sense of humor, deep cut Easter Eggs, and blink-and-you’ll-miss-them insults at the live action DC films which makes the show great.  The quintet employs ridiculous solutions for their problems, like using big wheels that travel back in time using the power of rad to prevent the big names from becoming superheroes.  This adventure includes saving Krypton with the power of EDM and tangling baby Auquaman in one of those six-pack plastic holders.

There are plenty of juvenile moments that overstay their welcome.  A fart joke and a gag about pooping in a fake toilet are the worst offenders.  The little ones will love it.  But a few humorous moments are sprinkled in for the grownups accompanying their children.  The meta Stan Lee cameo was quite brilliant.

What was unexpected for me was the animated movie is also a musical.  The songs are fun and help to pad out the film’s run time.  “Upbeat Inspirational Song About Life”, sung by Michael Bolton, briefly turns the movie into a fever dream and will have you humming the melody for days on end.

Teen Titans GO! To the Movies might share some plot points with The Incredibles 2, but these are not even close to being the same movie.  Teen Titans is a solidly juvenile movie made for those who love the Cartoon Network series and the little ones who need one more movie to hold them over until school starts.