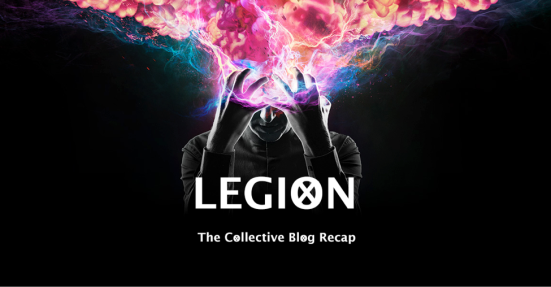 The race for Farouk’s body has begun with one party dangerously close to solving the mystery of where it is hidden.

Ptonomy explores his new home inside the D3 mainframe and realizes he is actually inside the mind of Admiral Fukuyama.  He watches as 17-year-old Fukuyama is recruited by a government suit to become a mind which cannot be read by telepathic mutants who are becoming more common in the general population.  Inside the memories of Fukuyama, Ptonomy sees the young man undergo many procedures which would turn him into the Admiral of D3.

Ptonomy also finds the Mi-Go monk who hacked Fukuyama’s network several episodes back.  He is now hooked up to the mainframe as well.  The mutant finds a way to control a Vermillion and tracks down David.  He tells David he saw Farouk’s body being kept somewhere called Le Désolé.

Acting on a tip from Future-Syd, Oliver finds the woman, now residing in a retirement home, who drove The Shadow King’s body to the Monk’s temple.  She agrees to tell them where the body is kept in exchange for “the endless dream”.  Not sure if she is dead or in a coma, but the two men are off to the desert.

Gone to Kill the Monster

David uses the strawberry-flavored water tank to find Le Désolé.  Knowing Farouk will tap into the minds of his friends, David puts together a series of plans which will serve as decoys against his enemy.  He implants the plans inside Lenny, Clark, and Cary’s minds then slips a note under Syd’s door to let her know he is leaving.

Syd vents her relationship woes to Clark.  She misses how they were at Clockworks and Summerland.  They had an intense connection, but now there is a great deal of distance.  Syd is no longer steadfast in her want to be with David, but she knows there is still love between them.  Clark then carefully tells Syd David could potentially destroy the world if she were to hurt David’s feelings.

By the end of the conversation, Syd is resolved to follow David on his journey to kill Farouk.  Just outside the door, Melanie (who I nearly forgot was a part of the show) is listening to the entire conversation.

Farouk and Oliver travel through the wasteland on a rickshaw looking for the temple which moves around.  The powerful mutant can sense when he is near and hints David has not figured out the method of tracking the temple and will wonder the desert until he dies.

David, who is eventually joined by Syd, travels on foot and it seems as if Farouk is right.  The two lovers wander as if they are clueless as to where to go next.  As they meander about, David releases Lenny from her cell at D3 to start carrying out his plan.

David and Syd stumble upon an abandoned camp site as a storm approaches.  They hunker down inside the tent only to find the skeletal remains of themselves inside.  Syd sees the remains as a sign no matter what they do, they will end up in the same place.  David doesn’t see it quite that way.  Syd challenges him to prove her wrong “when the time comes.”

David enacts the second part of his plan with Clark.  As the D3 interrogator begins to leave, he is clubbed over the head by Melanie who is being controlled by Oliver.

This almost feels like a penultimate episode, there is so much set up for bigger things to take place.  But it is nice to fully get back to the story at hand after taking so many detours.

I do enjoy the friendship developing between Clark and Syd, but the ending of their conversation left me disturbed.  Clark’s warning about David feels like a conversation many young women high school and college age are having now.  You can’t hurt your boyfriend’s feelings, he may snap and it will be deadly for all of us.  I don’t know if this was intentional or just a coincidence, but it was a surreally realistic moment in a show about superheroes with telepathic powers.

I guess we are not done with the Jon Hamm lessons.  I know there are many who don’t like these interludes.  I can understand, but I personally love them.  It makes me wish my psychology classes were voiced by Hamm.

This week was a lesson on the dangers of treating people as they don’t matter drawing a parallel to people who live in a cave to those who a glued to their smartphone screens.  The world we experience through the phone is real, not the real world that doesn’t resemble anything we see on the screen.  If we don’t see the people we interact with online, then we are able to forget that it is an actual person with real feelings on the other end.

I think the warning here is to David.  While planning, he had little game pieces with everyone’s faces on them.  He would move them around the replica of Le Désolé like one would do in a strategy game.  They were no longer people, just “shadows” he saw.  David is becoming less like David from season one and more like Farouk.

Next week looks to shift focus back to Lenny as she is enjoying her new-found freedom.  But it also seems as if Amy Haller is still in there.