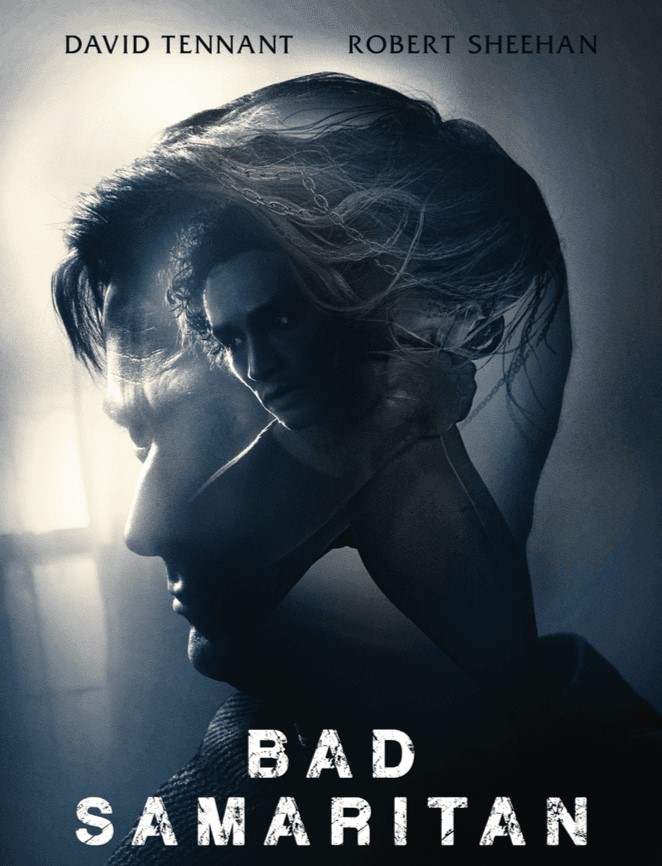 Between Bad Samaritan and Jessica Jones, I’m having a hard time looking at the 10th Doctor in the same way.  That’s not a complaint.  I love David Tennant is willing to take on risky roles and not coast on his popularity as (arguably) the most loved Doctor.  I just wish Brandon Boyce’s screenplay and Dean Devlin’s directing would have given him something better than Bad Samaritan.  Not to say it is a bad movie, it is just not a very good one either.

Sean Falco (Robert Sheehan) is a gifted photographer unwilling to use his talents to garner himself a paying job.  Corporate work is too soulless for the artist.  To make ends meet, Sean works as a valet for an upscale restaurant.  This is all a front for he and his partner, Derek (Carlito Olivero), to rob the homes of rich clientele.  But only the jerks and they only steal items they are sure the homeowners won’t miss or notice is gone.

The score to end all scores rolls up one evening in a Maserati.  Cale Erendreich (Tennant) pulls up to the valet stand and it is easy to hate this guy even before you find out he keeps women tied up in his house.  Cale is the epidemy of those people who treat everyone around them like dirt simply because they have money.  Talking on his cellphone about some big deal he is working on loudly just so everyone can understand how important he is.  Cale makes for the perfect target for Sean and Derek.

Cale’s sparsely decorated, yet opulent home provides a newly arrived and not yet activated Black card which could provide the boys with a big payday.  Sean goes to investigate a locked office only to find a woman (Kerry Condon) chained to a chair, heavily beaten, and gagged.  Sean does his best to get her free, but bails when Derek calls in a panic.  Cale is at the valet stand wanting his car.  When Cale arrives home, he quickly realizes the valet has been in his house and relishes the new game of cat and mouse before him.

This plot has been done many times before and better which almost makes Bad Samaritan boring.   It is all too familiar especially if you grew up with 90’s thrillers like Single White Female, The Game, and The Hand that Rocks the Cradle like I did.  The only thing that helps this movie stand out from looking like a 90’s throwback is the baddie has a multitude of high tech gear allowing him to somehow be everywhere at once.

The cast has talent enough.  Sheehan does a great job of making his character relatable even when he is bumbling things up.  Derek asks Sean why he didn’t give the house phone to the girl so she could call the police.  Sean couldn’t think straight, he was terrified.  Sheehan portrays those emotions so perfectly you can’t help but believe him.  Tennant is not as good as he was in Jessica Jones, but I blame that on a laughably bad back story of Cale’s obsession with breaking people as if they were horses.  His stumbling with an American accent doesn’t help.

The real shame in Bad Samaritan is if Devlin would have leaned more into the crazy and aimed for a more over the top film, the horror/thriller would have turned into an oh-so-awful-it-is-awesome cult classic in the vein of Mr. Brooks and Anaconda.  Plot conveniences and familiar storylines can be forgiven as long as one is entertained.  You would think a man who produced popcorn-flicks like Stargate and both of the Independence Day movies would understand over exaggerated is better when dealing in clichés.

While it may have its moments here and there, Bad Samaritan never becomes more than a standard sociopath versus everyday schlub outing.  It is best reserved for those sick days laying on the couch and nothing else is on TV.  Tennant fans, keep your expectations low.