Banner by the Collected Mutineer

A Gravitonium arises and lemons are purchased as the series barrels down towards what looks like an epic finale.

Spoilers for the Future

When life hands you lemons…

How did lemons become the symbol of courtship in the future?  Is it because of that saying, or is it because lemons are good for your health?

Deke, still in recovery from a bullet wound, soberly confesses his affection for Daisy after Mack and Coulson force his hand.  He seeks advice from the two men, but Coulson is still dealing with the fallout from May’s love confession and Mack is on the outs with Yo-Yo after she locked him inside of a cell.  The future man decides to rely on his timeline’s courtship rules.  When you love someone, you pool all your resources to buy a lemon and leave it on their bunk.

Compliance will be rewarded

Under Hydra programing, Talbot pauses the cameras on Robin’s room.  He is to bring the young Robin Hinton back to Hydra.  When she and her mother arrive back to their room, the General puts Polly in a choke hold till she passes out and walks off with Robin.

Coulson notices the paused camera and he, Mack, and Deke rush to the room realizing it had to be Talbot.  Deke stays with the still alive Polly while Mack and Coulson track Talbot and Robin down at the hanger doors.

The two S.H.I.E.L.D. agents attempt to talk the agitated Talbot down as he aims a gun at Robin.  Coulson begs him to fight the programming and Talbot tries his best, but in the end the general aims the gun at his own head thinking this is the best way to fight the programming.  Mack gets Robin away from Talbot and out of the area.

Not wanting to lose his friend and ally, Coulson uses the compliance speech to get Talbot to aim the gun at Coulson.  Talbot complies and this distracts him long enough for Mack to pop out and shoot Talbot with an icer.

Ruby and Werner threaten, bully, and beat Fitzsimmons until the couple rebuilds the infusion chamber.  While working on the contraption, they try to warn Ruby of the dangers in infusing herself with Gravitonium, but the little badass refuses to listen.  She has been working her whole life for this, no one is going to stop her.

When Werner hooks the finished chamber to the gravitonium box, Jemma tells him they can’t move the volatile element.  But the gravitonium willingly moves itself into the chamber, as if it wants to be infused with someone.  Ruby steps inside and Werner starts the machine. 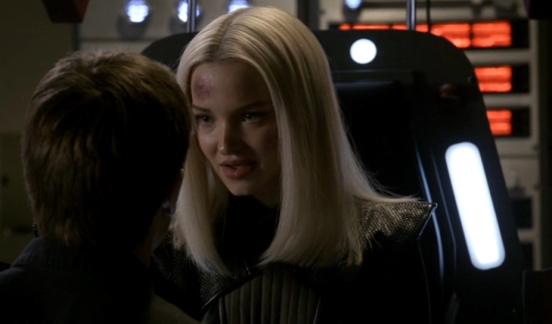 As they are preparing the chamber, S.H.I.E.L.D. infiltrates the Hydra High base.  Hale quickly surrenders the entire base to Daisy and May.  She has seen the effects of the gravitonium on Creel and doesn’t want her daughter to end up the same way.  Teaming up with S.H.I.E.L.D. is the best way to help her daughter.  Daisy and May promise to not kill Ruby as long as they don’t have to and bring Hale along in case Ruby needs to be talked down.

Once S.H.I.E.L.D. arrives, it is evident Momma Hale will be needed.  Not long after Werner activates the machine, Ruby starts to scream in agony.  Fitz stops the machine, but 8% of the gravitonium has fused with Ruby.  That small amount has given Ruby strength which could rival’s Daisy’s, but it also let the feuding Ian Quinn and Dr. Franklin Hall inside her head.  The two of them yelling to be free and at one another drive Ruby mad.  Werner goes to comfort her and she accidentally caves his head inside itself in one of the more gruesome deaths we have seen on this show.

Hale strives to talk her daughter down.  Daisy even steps in, seeing so much of old herself inside this young woman.  The two are able break through here and there, but it stays touch and go as the two men become louder inside Ruby’s head.  Yo-Yo arrives and recognizes Ruby as the woman who cut off her arms and the destructive power Ruby wields.  Not believing she can be saved, Yo-Yo grabs Ruby’s Chakra and slits Ruby’s throat as Hale is trying to hold on to her daughter.

Daisy is horrified at Yo-Yo’s actions, but the Inhuman knows in her heart she just saved the world.  Ruby’s dead body begins to float as the small percent of the gravitonium leaves her.  Hale uses the distraction to escape back to the Hydra base.  She teleports to the Confederate ship and tells Qovas S.H.I.E.L.D. has the gravitonium.

I’m mean, we all know Yo-Yo’s actions were probably a big catalyst to ending the world, right?

A big theory knocking around Reddit (can’t find the original redditor who originally posted the theory or other links that build on it at this time) is Coulson is going to allow himself to be absorbed by the gravitonium.  When Daisy is somehow bonded with the substance, Coulson’s conscious will be the calming voice inside her head that will keep her from destroying the world.

As much as the idea of losing Coulson pains me, this is actually a fitting end for the S.H.I.E.L.D. director.  In a way he is still alive.  If the show is renewed, the writers can find a way to bring him back.  But if the season finale is in fact the swan song of Agents of S.H.I.E.L.D., then it will be a heroic death for the much-loved character.

As sad as I am to see Ruby go (female baddies are always the best), it was time for that story arc to end.  This also makes for a great transition for Gravitron to be come the big bad for the final episodes.  Ever since early season one’s “The Asset”, comic book fans have been waiting for this villain to come to fruition.

Next week, The Confederacy comes to Earth and holy hell does it look like it will be a tense episode.