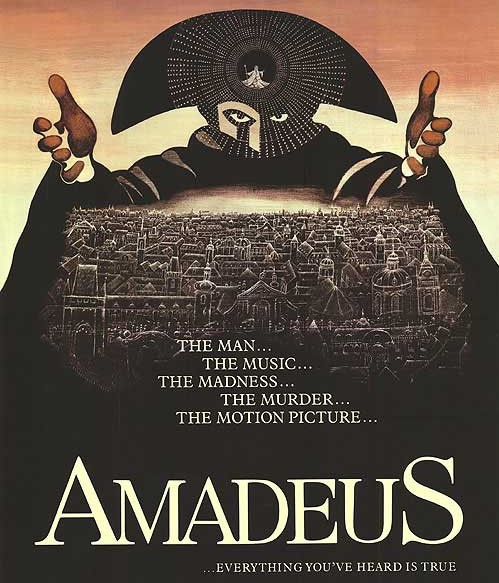 Since the Oscars just aired and the Best Picture victor, The Shape of Water, was met with some contention (as most are), I decided to re-watch one of the few winners of that category many seem to agree was the correct choice.  Amadeus is a fictionalized account of the rivalry between Wolfgang Amadeus Mozart (Tom Hulce) and fellow composer Antonio Salieri (F. Murray Abraham) which would lead to the suspicious death of the former possibly at the hands of the latter.

Richly colorful and wonderfully scandalous, Amadeus is mainly told from the point of view of Salieri.  As a young man, he wanted desperately to create music.  After the death of his religiously domineering father, Salieri is educated in Vienna and invited to be the court composer for Emperor Joseph II (Jeffrey Jones).  Attending a performance of Mozart pushes Salieri to realize his compositions are mediocre in comparison to this new talent.

Fueled by jealousy, Salieri begins a campaign to bring down Mozart.  He hires a maid (Cinthia Nixon) to spy on his competitor.  She discovers Mozart is going against the orders of The Emperor and composing an opera based on the play The Marriage of Figaro.  After Salieri informs The Emperor of the transgression, Mozart convinces The Emperor to allow a performance of his work.  At his wits end, Salieri hatches a plan to murder Mozart and claim his final composition as his own.

Amadeus’s brilliance is with Hulce’s characterization of Mozart.  He is not a brooding artist plagued by his genius, but a self-described “vulgar man”.  An immature punk-rocker with his pink-tinged wig.  He delights in his hedonistic antics, much to the chagrin of his father and the religious Salieri.  Abraham, on the other hand, brings a proud and sympathetic performance to the tortured adversary earning an Oscar for his performance.  We can identify with his heartache in seeing talent wasted on someone with whom it comes too easy.

Amadeus is almost a bit ridiculous with age, but the viewing pleasure it still there just for the music alone.