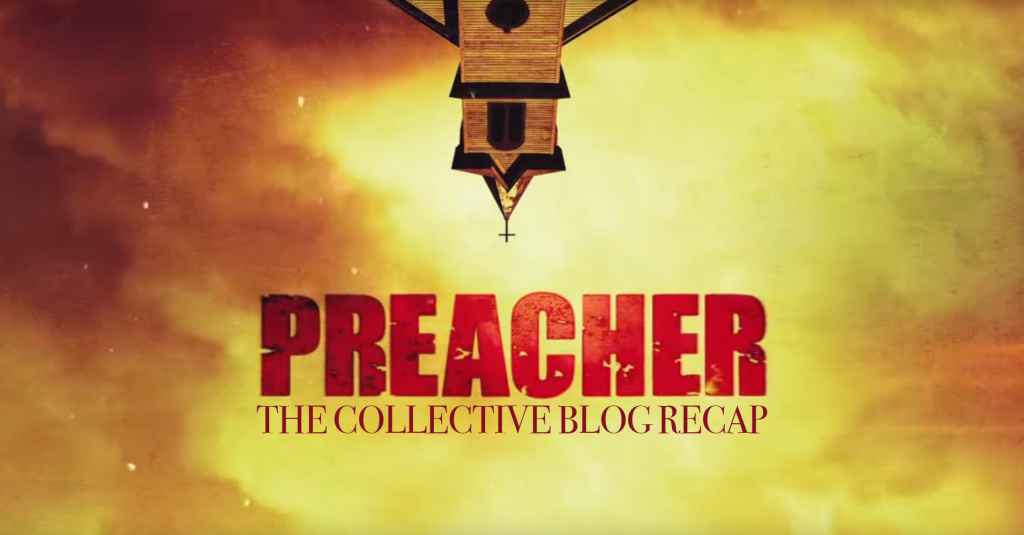 Jesse, Tulip, and Cassidy make their way into The Big Easy, but it is not all booze, boobs, and beads for the trio as mysterious forces and a bad past make themselves known.

Spoilers on the Road to God

A Preacher walks into a bar looking for God…

Splitting up from Cassidy and Tulip, Jesse makes his way through various clubs, getting laughed at by patrons and bartenders. A preacher looking for God in their establishment sounds like a set up for a good joke. A bartender eventually takes pity on Jesse and points him to a singer named Lara Featherstone. The bombshell-blond with a standard lounge singer voice flirts with the preacher before she is grabbed up by a group of masked men in all white and thrown into a van. Jesse commands the driver to stop and thrashes the would-be kidnappers. Lara takes Jesse back to her place where she packs her bags and grabs her baby to leave town. 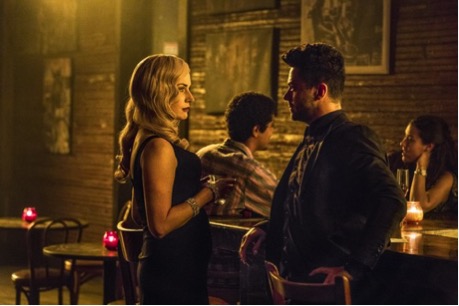 Sometime back, Lara met a man who told her about God leaving heaven and a “super-secret, crypto-religious fascist organization with designs on total world domination.” Ever since then, she has been seeing men in white following her and the man she talked to ended up washing up in a swamp dead. Lara pushes Jesse to reveal his power after she sees through his evasive rationalization his preacher collar automatically gets people to obey him. Jesse puts Lara and her baby in a cab heading to the airport, but not all is as it seems.

Lara meets up with the men in white, hands off the baby, and whips off the blond wig. She and the bartender who tipped Jesse off in the first place know they have found their man and pass the information off onto Herr Starr, a one-eyed, menacing figure who will hopefully be the thorn in our trio’s side for a long time.

The most ominous offering of lemon doberge cake ever

Tulip is extra twitchy walking around the French Quarter. She just knows someone is going to recognize her and let the shadowy Viktor know she is “in his backyard.” Leaving Jesse to his mission, Cassidy and Tulip get themselves set up with Cassidy’s friend, Dennis who lives nearby. On their way, they run into an old friend of Tulip’s who is surely going to rat her out to Viktor. Dennis’ place is nice enough, but it seems as if Cassidy over sold his friendship with the man.

Since he helped her clean up a dead body, Cassidy wants answers as to why Tulip is scared. Tulip only offers a cryptic “I’m doomed” and says telling Jesse would only make the problem worse. Eventually, Tulip embraces her fate and steps out for cigarettes where Viktor’s men close in on her. 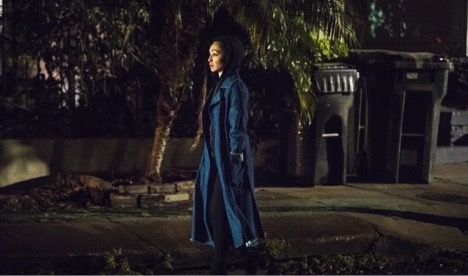 We finally check in on Eugene who has been cooling his heels in hell since Jesse banished him there sometime back. Like the Saint, Eugene has been reliving his worst memory over and over again. And his neighbor is Hitler.

After receiving a frantic phone call from his friend Tracy Loach, Eugene rushes to her side. A rival at their school caught Tracy’s boyfriend cheating on her “with a 5” and she is going to shoot herself with her father’s shotgun rather than live with the shame. Tracy called Eugene over so he could carry out her wishes in her suicide note. Eugene convinces the her she has much to live for and burns her suicide note for good measure. But things go terribly wrong when the young man goes in for a kiss.

Grossed out by the idea that Eugene now thinks he is good enough for her, Tracy shoots herself with the shotgun. Eugene attempts to stop her again, but is only able to stop her from completely blowing her head off. Trapped in Tracy’s room with her mother banging on the door demanding an explanation, Eugene decides to turn the shotgun on himself. 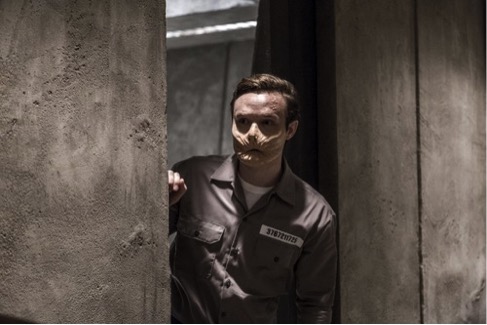 This new origin story gives us another reason to feel sympathetic for a kid who doesn’t belong in hell, but is stuck there because Jesse seems to be lost in another mission and hasn’t given the poor kid too much thought. I’m wondering if that is the point. Jesse condemned a good kid and is in no hurry to rescue him because he thinks, like everyone else in Annville thought, Eugene tried to kill Tracy. Jesse may be the hero of the story by default, but does he deserve to be?

Jesse also seems to not be able to help himself when it comes to using Genesis. He knows it will bring the Saint to his location, but he unnecessarily uses it twice in one night. And now it has another group of baddies on his tail.

This new group is known as the Grail and they had the preacher pegged from the word go. They knew he couldn’t resist a damsel in distress. 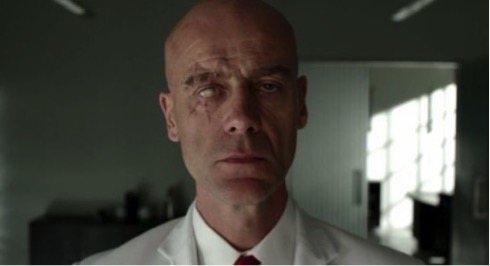 I laughed a little too hard at the “Your loss dipshit” graffiti on the “You are leaving Texas” sign. It genuinely seems like something that a native Texan would do (and this is coming from a native Texan).

Raise your hand if you think the bearded man explaining “A Walk to the Peak” to Jesse is God.

The Nerdling was born in the majestic land known as Texas and currently resides there after several years of journeying through Middle Earth in a failed attempt to steal the one Ring from that annoying hobbit, serving the Galactic Empire for a time, and then a short stint as a crew member on the Serenity. Since moving back to her homeland, Nerdling flirted with a hero reputation. Saving children from the dangers of adoring domineering, sparkly vampires (champions with souls are the only vampires worth loving) and teaching normals the value of nerdom, all while rooting for her beloved Dallas Stars. Then came the Sokovia Accords and her short spell of saving others came to an end. With Darth Vader’s reputation rightfully returning to badass status, Nerdling is making her way back to the Empire. They do have cookies, you know. You can find her on Twitter @nerdlingstale.