So I’ve come to the realisation that watching centurions on Doctor Who feels weird for me now unless Arthur Darvill is there. Sorry, not sorry.

A Brief Overview of What Happened

This episode brought back one of the writers from the classic series, Rona Munro. And with the opportunity to take hold of the reins of Doctor Who once more, she decided to bring us an answer to one of the many questions history has given us; What happened to the Roman Ninth Legion?

This trip to ancient Scotland is brought about by a dispute between Bill and the Doctor. The Doctor believes they were all killed in battle, but Bill is certain that they weren’t. To try and prove one another wrong they split up. Bill heads one way, certain she will bring back proof the Ninth Legion didn’t die, and the Doctor heads the other way certain he’ll prove her wrong.

On their separate journeys Bill finds several survivors from the Ninth Legion, while the Doctor comes across all the Romans that did die, and the person who brought about their deaths; A Scottish Farmer called Karr. Also known as “The Gate Keeper.”

The gate that she “keeps” is a portal. The Doctor described the other side of the portal being “the space between the worlds” so I’m just going to call it the void. In the void, there are creatures which try to travel into worlds and feed off light. And will essentially keep on feeding until there’s no light left. The Scottish farmers have been working to keep the monsters away with one of them entering the portal to fend them off. In real time whoever goes in lasts a matter of minutes, but a dimensional rift of sorts means that those minutes equate to decades out in highlands. But then the Romans turned up.

Karr came up with an idea. Open the gate and release one of the monsters. She figured… well, hoped that the monster would kill off the Romans but that the Romans may have also weakened the monster enough that it’d eventually die, too. But instead it eventually started to build back its strength. Of course, the Doctor has a plan. But as the remaining centurions come face to face with the people who killed their comrades, it requires them putting their differences aside for the common good.

Working together they manage to lure the monster back into the portal. Then it’s just a question of who is going to sacrifice themselves to stop them from every getting back out. A single human won’t be enough, so the Doctor plans to enter the portal himself fend them off for the rest of the eternity. But with the vault still needing his protection too, Bill and Nardole know that this just won’t do. Karr and the Romans aren’t too keen on the Doctor’s idea either and instead they overpower the Doctor and enter the portal themselves. So many people entering at one time causes the structure of the cave the portal is in to collapse, effectively sealing it off for good. And Karr’s brother carves the story of what happened into a tomb stone so they will never be forgotten.

Has The Doctor Become A Bit Too Reckless?

This episode we did see Nardole questioning the Doctor’s decision to leave the vault yet again. A bit odd, since he didn’t seem to bother when they went to Mars, as the Doctor did point out even if we weren’t given an answer. And in the end, the point was mute, as the Doctor had let Missy out of the Vault and into the TARDIS as some sort of housekeeper for him. As it was pointed out, she’s just as trapped in the TARDIS as she would be in the Vault. But it’s beginning to make me wonder if the Doctor’s becoming too trusting, and too reckless.

Despite Missy showing all kind of crying does suggest she is becoming “good”, I’m still not entirely sure I can trust any of it. The Doctor’s not completely trusting of it, either, but he has one thing that I don’t. Hope. And it’s starting to make me wonder if that hope will bring about his death. He admitted it that hope is hard to resist, after all.

Not to mention how he just let Bill wonder off on her own. Remember the days when he lectured his companions for days on end about not wondering off? If anything, I thought Twelve would have been even worse than his previous regenerations for that. Perhaps not.

The last couple of episodes have also been exploring more of the soldier side of the Doctor. In Empress of Mars we saw him admit he knew what the outcome would be because he “thinks too much like a soldier”. And this time I think we saw him act like one a little bit. But sometimes it made him seem downright rude. Dismissing Karr and her friends, calling them “embryos”. Giving Karr a really hard time for what she did I thought was a bit too far, too. Sure, what she did had massive consequences and she did slaughter 90% of the Ninth Legion, something the Doctor would never be too keen on. But he seemed to almost forget why she did it. The Romans were invading them, threatening their way of life, and were going to kill or enslave them. When it comes to that part of the story, the Romans were the bad guys there, but the Doctor seemed to forget that.

[That wasn’t the actual subtitled. Just in case anyone was wondering. But it was basically what the Doctor was thinking, I am sure of it.]

Of course, his belittling did work. As Karr finally stood up to him, and took the fight on for herself. Maybe that was his aim of it all in the first place, to give her a back bone. In all honesty, that is what a soldier would do.

I don’t know about you, but I wasn’t too keen on the discussion of Bill’s sexuality in this episode. I mean, don’t get me wrong it was nice that she wasn’t in the receiving end of any homophobia, and have some other gay/bisexual characters in the episode in the form of two centurions. But I wasn’t happy with the way one of them almost dismissed her sexual orientated for being “limited” and “old fashioned” because she didn’t like both genders. I don’t know, it just left a bit of a bitter taste in my mouth. There’s a way to talk about different sexualities on TV, and that wasn’t it. 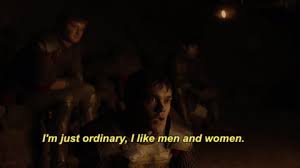 With one of the old classic series writers behind this episode, I did feel like the show went back to its roots a little bit. I’m no expert of the classic series in the slightest. I’ve only watched a couple of episodes. But from my understanding the classic episodes were all about historical events with a bit of science mixed in. And this is exactly what this was. We had a well-known historic setting, with a little gap in it that allowed Munro to give her little take on the events. The missing Ninth Legion and the Scottish Farmers behind that mystery were the forefront of the story. The science fiction of a dimension portal filled with light eating monsters was just an add on.

And I enjoyed it. It wasn’t bad, it wasn’t great. But it was okay, and I liked it. It was safe, and helped to make this season one of the stronger seasons that we’ve seen in a while.

Catch me next week when I’ll be writing about the penultimate episode of season 11. AND THE RETURN OF SIMM!MASTER YAY!

Johanna an avid writer and lifelong Doctor Who fan living in the UK. By day she is a student, studying Media and Film Production, and by night she fangirls about all things TV/Film related on Twitter and writes posts for a variety of blogs as well as her own lifestyle blog.