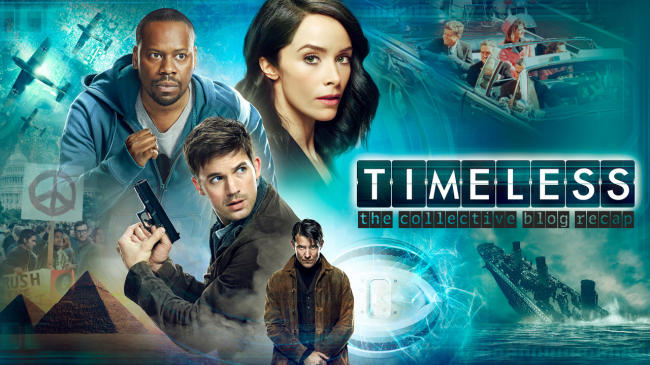 “Have you ever had a secret that just scared the living hell out of you?”

The hardest part about keeping a secret is remembering what lies you’ve told to whom. Who knows what? Who will they tell? The anxiety and the constant fear can make you crazy. And then, sometimes, it’s in hindsight that you discover that you weren’t the only one holding back. How can you be mad and hurt at someone else for the same sins you yourself committed?

We’re back in the 70s on the hunt for the missing Watergate tape, right? Those 18 minutes of silence must pin Rittenhouse to the wall. But no, Flynn’s already got the tape in hand when our team gets there. He spills the beans about his and Lucy’s conversations on past missions, which pisses Wyatt off to no end, and then announces that Lucy’s future-journal has been his inspiration. Rufus and Wyatt feel completely betrayed, but Lucy pleads that she didn’t write it and she doesn’t know what the truth is anymore.

They all listen as Nixon dares to name Rittenhouse out loud in the Oval Office, muttering about how “we need to get the doc back.” Well if it’s important to Rittenhouse, Flynn wants it. He holds Wyatt hostage and gives Lucy and Rufus five hours to find the missing doc or their friend is dead. Lucy reaches out to the man who leaked the Watergate scandal in the first place, “Deep Throat” himself, Mark Felt. He tells them that the amateurs who broke into the Democratic National Convention headquarters in the Watergate Hotel went to the wrong hotel room, where a crumpled piece of paper with a Black Liberation Army emblem holds the key.

Rufus’ knowledge of all things BLA gives him the info and clout to convince their leaders to give up the doc. Turns out, she’s an actual doctor, an African American woman who was trying to escape Rittenhouse after being born into it. As keeper of the Rittenhouse roster, she has memorized the name of every member since the organization was formed in 1778. She wants to go to San Diego, hop a boat, and reunite with her husband and daughter in Hong Kong.

Throughout this adventure, Rufus has been threatened into making phone calls to report to Rittenhouse about their progress. He’s been told to destroy the doc. When Rufus explains that the doc is a person, he’s ordered to kill her. At that point he’s had enough. He shows Lucy the thumb drive on which he’s been taping their conversations and dumps it in a sink full of water. Lucy is livid, asking, “How can we ever trust each other again?”

With an hour left to rescue Wyatt, Lucy and Rufus call both Flynn and Rittenhouse to the house where the doc had been stashed, using the diversion to get to their friend. The ruse works, Lucy frees Wyatt and the three get the doc back into the hands of the BLA so they can escort her to San Diego. Rufus makes his last call with a hurried explanation about what went down at the old house and how the doc got away.

Rittenhouse (a.k.a. TOWG) gets pretty heavy handed this episode, and we see how deeply in bed Connor Mason is with them. Rufus spends some unpleasant time in the back of a limo with both men, during which TOWG is sufficiently creepy in his knowledge of Rufus’ family’s activities. Rufus is told that no one, himself included, is to listen to those missing Watergate tapes. Well that ship sails within the first two minutes.

Although Flynn and Wyatt talk about their pasts in the 70s, I think their discussion fits better here because it seems, well, a more present-past than in the past-past? Anyway, Flynn is becoming our new anti-hero, his ramblings making more sense as we discover that Rittenhouse murdered his family and framed him for their deaths when Flynn merely asked a friend of his at the NSA about the organization. And Garcia Flynn knows how to hold a grudge, ladies and gentlemen. He is hell-bent on wiping Rittenhouse off the map, and since Rittenhouse is like a cancer on American history, Flynn is fine with wiping out the good with the bad. He just hopes that one time he comes back from the past and has changed something enough that he has saved the people he loved.

Ultimately, Rufus finds himself sweating it out in the back seat of a limo again, and not in the fun way. The voice on the other end of the phone that he gave his reports to was none other than TOWG, and TOWG is pretty sure that Rufus is hiding something about how it all went down that day in the old house.

Flynn promises that he and Lucy are going to be quite the team, but that may not actually be the case. Lucy’s future-journal is not infallible. Thankfully, she didn’t write everything down, plus according to Flynn, sometimes what she writes just sounds crazy – harsh words from our resident psychopath.

Now that Wyatt knows what they’re up against after hearing Flynn’s story, he tells Rufus that his new job is to be their double agent. Wyatt’s strategy is to have Rufus continue to tape them while also reporting back what he learns. But it’s not all happy times and the band’s back together. Wyatt informs Lucy and Rufus that he doesn’t trust either of them.

Okay! Okay, okay. The ending! I mean that was the classic definition of “Surprise ending.” I was so surprised I actually OMGed out loud. Seriously, I yelled at the television. Fantastic!

So what am I talking about? Sadly, I can no longer call our favorite Rittenhouse douchenozzle “TOWG” because holy Mary, mother of God, he’s actually Benjamin Cahill! Wait, who’s that? It’s the name Lucy’s mother wrote on that little slip of paper. Yes, the big baddie is Lucy’s biological father! She rings his freakin’ doorbell and he answers it. She claims “wrong number” because she’s just not emotionally prepared to have that conversation right now, but you know dochenozzle, I mean Cahill, knows exactly who she is. If only Lucy had asked the doc to rattle off a few new recruits on the company roster before seeing her off.

Next stop – Pre-America, and does anyone know how to change a tire on a prototype time machine? No? Well then, we might be here for a while.

About the author: Liz Bowen is a long-time Doctor Who fan, Supernatural convention-goer and amateur blogger living in Colorado Springs. She enjoys seeing her childhood recreated in cinematic excellence and will gladly argue the merits of Marvel over DC. She indulges in writing fanfic and is working on her first original book.