Grab onto your saddles folks, because it’s going to be one hell of a ride!

This week’s episode begins not in Annville but just outside of Ratwater in 1881, in another cold opening which is quickly becoming a trend. We are met with a sick young girl and her mother, the girl is in a bad way and so she sends her husband to fetch some medicine from the nearest town. Immediately it is clear this man is quite a formidable character, and as a fan of the comics, he is instantly recognisable, (don’t worry I won’t spoil it for you Preacher newbies!)

Our rugged Cowboy (played by Graham McTavish) grabs his dusty jacket, hat and then rather pointedly decides not to pick up his guns, a shot which is framed so that you are left with little doubt of it’s significance. The vast, harsh landscapes utilised in these shots have an old time feel and play off the characters beautifully. The Cowboy reveals himself to be a brooding, dark character, speaking little, even in the face of overly friendly travellers he reluctantly stops to share a meal with. He only speaks to refute the travellers claim that the untouched wilderness is paradise, but saying ‘It ain’t.’ Then we see him riding past a tree full of slaughtered Native Americans, scalped and strung up and he doesn’t bat an eyelid. I could honestly watch this opening sequence again and again, it pays homage to old John Ford Westerns in both the shot styles and characters (a recurring theme of the comics.)

Back in the present and Annville, we are met with a newly evangelical Jesse performing Baptisms for his congregation. All too soon however Tulip sidles in and tries to tempt him into taking up the job again, but he continues to refuse her. Post service, an unrepentant Cassidy rubs up Emily the wrong way and she pleads with Jesse to intervene. One thing Cassidy is good at is rubbing people the wrong way, I guess you don’t have to worry much about dying when you’re a vampire!

We then join Jesse in confession with another church member, this time a school bus driver who confesses to having less than holy feelings towards one of his charges. This clearly makes Jesse incredibly distressed but he is trying to be on his best behaviour and play the Preacher role, despite what his darker nature is telling him. However he is later seen using his powers to quiet the local wildlife before heading to bed that night.

The next day sees a large convoy of vehicles marked Q.M.& P (standing for Quincannon Meat and Power) on it’s way to a single little house, with the apparent job of strongarming a couple into selling their property to the company. This serves as our introduction to one very slimy character indeed, Mr Odin Quincannon (played by Jackie Earle Haley), it’s obvious we’ll be seeing more of this man, although he comes across as rather inhuman, he is indeed so.

Tulip then continues to antagonise Jesse, this time by stealing his truck’s steering wheel and tying it to the top of an adjacent lamppost! Once he finally makes it home after fixing his truck (what we wouldn’t give to see that scene!) He’s met by Cassidy holding up a bottle of communion wine and saying his dinner’s getting cold. The two then have a heart to heart about ‘God’s plan’ for Jesse and if it is worth living this lifestyle for it. Eventually Cassidy seems to knock Jesse out with the intention of grabbing his keys and getting the hell out of dodge. 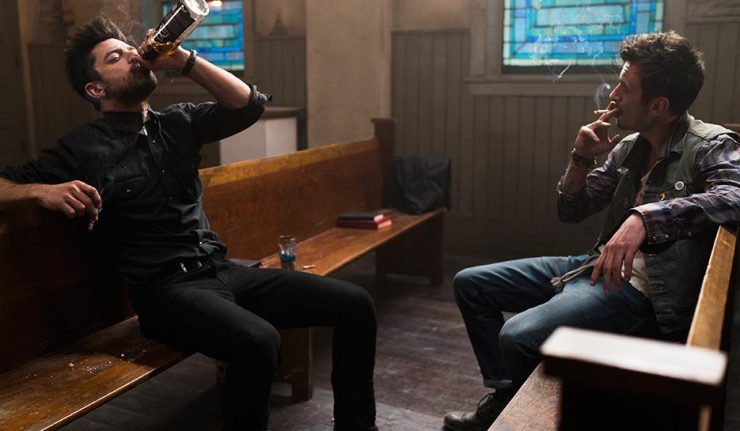 But luckily the heavy hitting subject matter is broken up with some light comic relief in the form of our not so dynamic duo. After spying on Jesse waiting to confirm their belief that the entity lies within him, they finally make their move. They attempt to cajole the almighty being into a tin using a music box and a song, but when that fails they settle for plan B, chainsawing him in half. Cue Cassidy saving the day in another uber gory fight sequence ultimately resolving itself with him at the victor over the two mysterious men and cutting the bodies up for removal.

Jesse comes out of his drunken stupor in time to make his house call to a girl in a coma, the mother seems to hold no value in his visit as it makes no difference to her situation. On the way home he is kidnapped by Tulip in an attempt to coerce him further, the job seems to hold utmost importance to her and their may be more to this than meets the eye. Nonetheless Jesse still refuses to hear her out and she leaves him to cut himself out of a shackle in his kitchen, where he is visited by Eugene Root, who eventually seems to spur on an epiphany in our man of God.

A newly inspired (but not in the same way as last episode) Jesse heads over to his would be predators house and intimidates him in hopes of keeping him away from the object of his desire. When he seemingly gets nowhere with this, he ends up using his powers, telling him to ‘forget about the girl’. After which the man cannot recall why Jesse is there or who the girl even is referring to. Jesse (who seems to have discovered the correlation) is shocked by his sway over people and flees into the night, where incidentally our irish vamp is burying the leftovers of the secret duo. The shot pans out to show it is under the very tree from which the bodies were hanging in the opening scenes. The bigoted Sheriff is then seen talking to the very same duo asking them who they are, to which they answer with ‘the Government’.

Finally the episode closes with Jesse calling upon the mother and daughter from before, he claims it is just to pray with her. But he seems to be testing out his newly discovered skills, the last shots being him asking her to ‘open you eyes’.

Things we learnt this episode:

They must go through a ton of fake blood on this show *looks at Cassidy like in The Office*
Everyone in this town is hiding some dark secret!
Jesse is torn between two devils, one on each shoulder, while he is determined to do good.

Also from next episode onwards we get a TITLE SEQUENCE *jazz hands*, check it out! (Courtesy of EW)