Season 6 of The Walking Dead is in full effect and episode 10 takes us two months into the future after the walkers and Wolves broke through the walls of Alexandria. The world is changing, but the rules remain the same. Kill the dead, fear the living.

Life in The Walking Dead!verse is mostly blood, guts and gore, but this episode reminds us how important community and human interaction are to survival in post-apocalyptic times. The two month time jump serves to clean up the mess of how the walls were rebuilt and the interpersonal struggles of uniting the Tribe and the Alexandrians after such devestation. Members of the new, united Tribe have learned to work together and are taking the time to figure out their individual places within the group, which is necessary for the new, united front to remain functional. This, of course, begins with Tribe leaders who are strong as well as wise, and can satisfy the physical, emotional and even spiritual needs of the Tribe.

When two of our Tribe leaders, Rick and Daryl go on a run, it’s to find food to bring back to what seems like a very hungry Alexandria. They’re looking for food more than people these days, and, while early in the season, Daryl felt strongly that new people should be brought into the safetly of the walls, his attitude has changed since the Wolf attack. He broaches the subject multiple times with Rick throughout the day, who once believed it was too dangerous to allow new people in, but seems to have changed his mind. It’s an interesting juxtaposition to consider when the pair meets a man named Jesus, who claims to be alone and running from walkers, right before he steals the truck full of food they happened to find.

While Jesus seems to be without a Tribe, Rick notices his beard is neatly trimmed and he is fairly clean, suggesting that there is more of a story behind what Jesus initally tells them. It almost seems deliberate, the way the food is set up, how Jesus leads them on chase, only to lose the food and get knocked out. He ends up behind the walls of Alexandria with a head injury and no answers, as of yet. 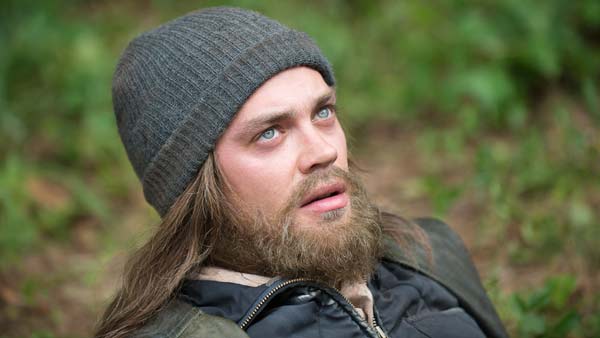 On the outskirts of Alexandria, Carl and Enid continue trying to figure out how to be kids in a post-apocalyptic world. Carl is determined to coax Enid out of her shell and into the community of the Tribe, but Enid seems determined to remain seperate, for the time being. While they’re arguing about this divide, Carl spots a walker who turns out to be Deanna. He knows that Michonne and Spencer are outside of the wall as well, and so he leads Deanna toward them, in hopes of allowing Spencer some closure with his mother. It’s a sad reminder that Carl was also forced to kill his mother, Laurie, when she gave birth to Judith and died, only to turn into a walker moments after her death. Carl tells Enid she “wouldn’t understand” and, perhaps he’s right. Spencer, in fact, had been looking for his mother in order to lay her to rest, and so when she is led up by Carl to he and Michonne, Carl essentially gives Spencer, not only the ability to say goodbye to his mother, but to also be sure that she is laid to rest.

This powerful scene is followed by another intense moment, during which Michonne confronts Carl for his stupidity in leading Deanna to them and not immediately killing her. He argues that Spencer needed to be allowed to have that peace and acknowledges that he would do the same for her. He respects and loves Michonne, and perhaps for the first time, she feels as if she is part of, not only the greated Tribe, but the Grimes family. To the surprise of absolutely no one, by the end of this episode, Rick and Michonne, after sharing a domestic moment on the couch, decompressing about their shared shitty days, finally succumb to the chemistry between them, and Richonne is officially canon.

But that’s not it.

While Michonne and Rick are giggling their way to bed, Daryl is supposed to be watching Jesus, who is resting in lockup. Somehow, the stranger escapes or perhaps talked his way out? Because the last scene of this episode is Jesus waking up to a naked and very annoyed Rick and Michonne, claiming that he needs to “talk” to them. Talk about bad timing! Still, wasn’t it hilarious to see those two hop up out of bed butt naked, weapons in hand, ready to kick some ass? Love them! Not sure what Jesus is up to, but I’m as suspicious as season 4 Ricktator, so I don’t plan on giving this new guy the benefit of any doubt.

The Walking Dead airs on AMC Sundays at 9pm.

Leave a Reply to The Walking Dead Recap: “The Well” – The Collective Cancel reply