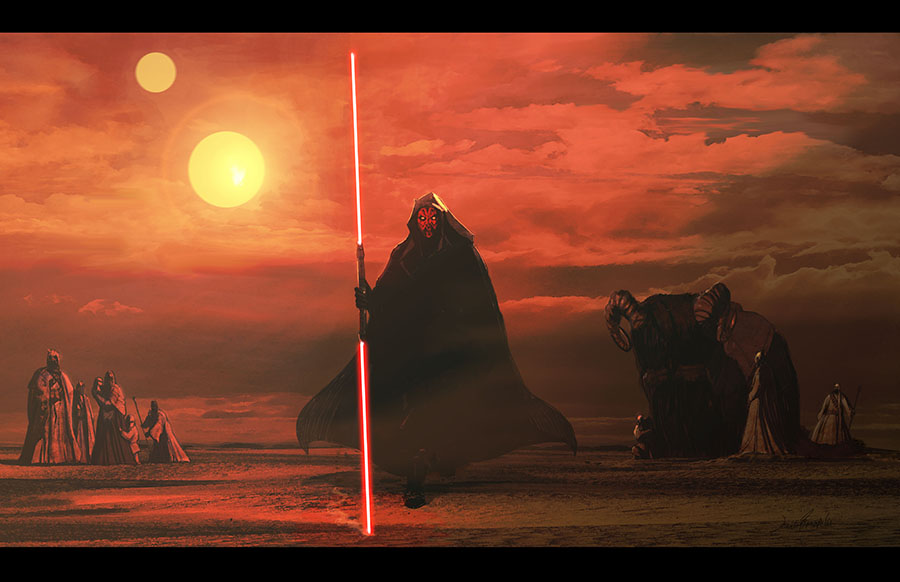 Darth Maul on Tattoine by livioramondelli on Deviantart. Posted with permission of the artist.

As we head into the prequel trilogy of our epic CollectiveSmash Star Wars Rewatch, we thought we’d share with you some of our favorite fanworks in the galaxy. First up, some awesome fanart by LivioRamondelli on DeviantArt.

Recced by the Collectiva Diva. This artist composed this piece as a “could have happened” moment in the SW films. The idea of Darth Maul taking a leisurely stroll on Tattooine, using his light saber as a walking stick, is an image that is simultaneously terrifying and beautiful. We love this colour scheme.

This second piece by this artist depicts the Emperor Palpatine arriving on a newly conquered planet. It’s as cold and sinister as the emperor’s soul. We love it.

Raise Your Weapon by sarsaparillia

Recced by the Collectress. An AU in which Anakin lives and betrays the Emperor Palpatine to protect his children. Luke and Leia are still separated at birth, with Leia being raised by Anakin and Luke by Padme. This story had me hooked at the first sentence, “The Rebellion didn’t start with a bang, but with a whisper.”

Author’s Summary: Set four years before the start of Rebels. Hera and Kanan struggle with their growing feelings for each other while chasing a criminal across the galaxy. Or, nine times they didn’t and one time they did…
Recced by the Collected Mutineer. (You probably recognise this author from her Johnlock fic, “A Cure for Boredom).

The Sith Who Brought Life Day by ophelia_interrupted

Author’s Summary: An Imperial officer loses a bet and has to get Darth Vader a present for Life Day.
Recced by the Collectress. You’ll never know how much joy this fic brought me. It depicts a life on the Death Star that proves that a job is just a job, and yet gives us the answer to a question long wondered by SW fans: how did Darth Vader learn who Luke was??? Highly recommended.

Got any fanwork recs for us? Come find me on Twitter.