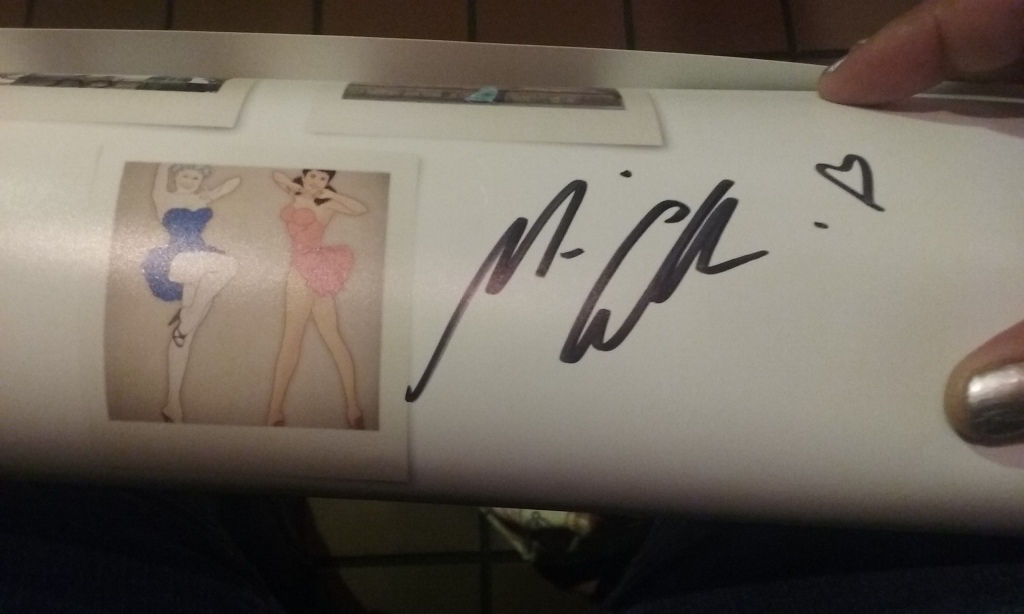 As many conventions that I attend throughout the year, the Supernatural convention is the one I look forward to the most. This show and fandom hold the dearest place in my heart, and so, when the dates for the 2015 SoCal Supernatural con were announced, I knew I would attend, even though, at the time, I didn’t have anyone to go with. The last two cons, I went with my own, personal TFW–the Collectress and Spaniard–who weren’t in town when the 2015 tickets went on sale and had no set plans to return from abroad in time to attend. Although they’d only been in England less than a month, last year my girls travelled across the Pond to attend BurCon 2014 with me, but I didn’t have such high hopes for this year. Still, I really REALLY wanted to go, even if it meant heading to a fan con alone.

First of all, let me say, I am a well-documented introvert and have a hard time going to these types of events without a support system. I can talk to people, but it’s hard for me to be “on” constantly and I enjoy alone time in order to recharge. Often, when I go places, I psych myself out, and end up ignoring everyone and reading fanfic on my phone. Not that that’s a bad thing, but an SPN Con is all about meeting fandom friends, old and new, while mingling with like-minded geeks, all obsessed with the same thing–SUPERNATURAL. To do this on my own, without my blogmate or bro, terrified me, but, much like the Winchesters do on a regular basis, I decided I needed to face my fears. I purchased tickets for two con days, another first for me (I usually go for one), because I wanted them, regardless if I ended up going alone or not.

Because this con was all about facing fears, I decided I had one more that I needed to conquer–Jensen Ackles.

If you know me, you know how I feel about Jensen, but you might not realize that I have a longstanding terror of meeting him in person. As an amazing father, actor and friend, Jensen is an inspiration, while his character, Dean Winchester, is one I empathized with and care deeply for. Plus, if you haven’t noticed, Grandpa Ackles is incredibly gorgeous. I’ve met a number of SPN cast members over the years, but have always shied away from Jensen, claiming I wasn’t ready, might do something stupid, or accidentally say something ridiculous in his presence. But, I decided when I bought these tickets that I was going to enjoy myself, and not allow fear to keep me from having a good time. So, when I got a chance, I bought a Jensen photo op and a Misha autograph, and plotted my demise at PasCon.

As the summer passed, I got the great news that not only were two of my fandom friends coming down from NorCal to attend PasCon, but my blogmate and bro would be in town, as well. I wasted no time getting the band back together and making sure they had tickets to Saturday (Misha day), but I still had my Sunday ticket and Jensen op to get through without them. The weekend of the con, TFW was back together again. We cosplayed (of course) and took pictures, we bought matching Impala license plate necklaces and hooted and hollered during Misha’s panel. The girls hung out while I waited in the autograph line, and when I got up to Misha and had him sign my poster collage of GishWhes pics, they stood outside the hall, taking pics and cheering me on. The highlight of the evening though, came when we made our way back from dinner and drinks, gabbing (rather loudly) about our newest fic rec list endeavor, which will include the dirtiest fanfic everyone reads but no one ever talks about. It was inbetween a conversation about FawnLock and Octo!Dean that we looked up to see Misha walking toward us on the street. The Collectress giggled a sound I have NEVER heard her make, and when it looked like no one planned to speak up, I ventured a nonchalant, “‘Sup Mish?” to which he answered back, “”Sup, gangstas?” and then we all died. It was a magical and perfect ending to a perfect day.

On Sunday, though, I woke up nervous. My friend Emmy and I headed out to the convention early in order to make it to my Jensen op first thing that morning and meet up with a few fandom friends. I decided to do a Human!Impala cosplay, and so my confidence was high (I looked good), but the thought of being in such close proximity to Jensen terrified me. Luckily, that man is as sweet as he is gorgeous, and our op went by in a flash. Soon enough, I was sitting in my G.A. seats, basking in the light of that chisled jawline. Emmy and I decided to split a J2M op, and so inbetween the pictures, I had the chance to meet some of my favorite internet peeps, including Jessica Mason, Collective guest writer, and Xylodemon, one of the best D/C fic writers I know. For me, this day was very different than the one before. Without my blogmate and bro, I was forced outside of my anti-social comfort zone in order to meet people and make friends, and it turned out really, really well. Yes, I spent some time alone and yes, I felt uncomfortable at times, but attending the con and gaining such a rich experience was more than worth it.

By the time Emmy and I had our J2M photo op, I was coasting on a con high, less nervous and more amped; excited because of all I had accomplished on my own that weekend. After another squishy hug from Jensen and Jared, Emmy took off with a couple of friends while I recharged on my own, plugged into an outlet and read fanfic. I sat on the floor and watched Misha, Jeffrey Dean Morgan and Jared (I missed Jensen) walk around the op rooms, mingling with each other and fans. With the Collectress’ encouragement, I ended the day with dinner and a beer on my own before heading home to ogle my ops and wait impatiently for SFCon in December 2016. While I may never attend another fan con by myself, I know now that I can and will face any and all fears…for a chance to hug Jensen Ackles again.