It’s been two weeks since San Diego Comic Con took over the Gaslamp District, but we here at the Collective still have so much to say about our first ever SDCC. The Collectress has waxed eloquent on equal representation, but I want to focus specifically the roles of women, including women of color, and children in the comic book, television and film industries (here-forth named the “industry”) and the shifting landscape of fandom.

The way current markets target female consumers is changing. At Comic Con, panels on female stereotypes in comics, the female gaze in manga, nerd girl fashion, geeky kids in the classroom and the discussion of female-centric content were scattered across this year’s schedule. One of my favorite of the smaller panels at SDCC was entitled, “Nobody’s Damsel: Writing For Tomorrow’s Women” and was moderated by D’Nae Kingsley, Head of Integrated Strategy at Trailer Park, Inc, an entertainment marketing agency. The panel focused on female representation in the industry and in attendance was Meghan McCarthy (Head of Storytelling, Hasbro & Executive Producer, My Little Pony Friendship is Magic), Issa Rae (creator, “The Misadventures of an Awkward Black Girl” web series), Molly McAleer (writer/co-founder, Hello Giggles) Dan Evans III (Creative Director, DC Entertainment TV) Aria Moffly (Creative Director, Development, DC Entertainment TV) and Sam Maggs (Author, The Fangirl’s Guide to the Galaxy & Associate Editor, The Mary Sue).

These various industry women (and the one black dude from DC) gathered to discuss how content creators can shift the industry to be more representative of the growing female audience. With one African-American woman and one African-American man on the panel, the discussion wavered between diversity in the industry and the shifting landscape of feminism. Each person on the panel agreed that we need to see more women characters in industry specific content and that these women should be written by women for women. In order to reach the female audience for the long term, we need authentic characters that represent the complexities of femininity and race, not played-out stereotypes or characters only meant for sexualization. Issa Rae made a number of points that deeply resonated with me, the biggest being the fact that she created the “Awkward Blackgirl” webseries because there were no women on television she related to. The admission is something that I understand as a geeky black girl with almost no geeky black girl heroes to look up to, and I took the time after the panel to tell her so. As an educated black woman, there isn’t a lot of content that is marketed directly to women like me, but Issa, who credits Shonda Rhymes as an hero, and women like her are working to widen the scope of the entertainment industry. I also agreed when Sam Maggs took the time to remind the audience that social media gives fans a way to directly communicate our needs to creators. We can reiterate the importance of female-centric content in a male-centric industry by utilizing Twitter, Tumblr, Facebook and even small blogs (like this one!) to reach out to other fans and strengthen our voices so that creators know what we want.

While the industry biggies are just now learning the importance of marketing directly to women (just give us a Black Widow movie, MARVEL!!), Her Universe, Ashley Eckstein’s fashion company, was created to fill a desire for fandom friendly clothes for women. At SDCC this year, Hot Topic, and their plus-size counterpart Torrid, worked with Her Universe to create the second annual geek couture annual fashion show, which was attended by over 600 people and covered by media outlets such as Variety, Hitflix, PopSugar and Nerdist.

On a panel entitled, “Geek Fashion: Level Up Your Style”, Dina Kampmeyer (The Geekie Awards) Amy Ratcliffe (Nerdist, Star Wars online), Anastasia Washington (Fashionably Nerdy), Josephine Moss (Geekosphere), Katie Elspeth (theatre costumer), Stephanie Bray (Subtle Fashion Geek), and Stephanie Pressman (Fashionably Nerdy) discussed how to incorporate fandom into one’s wardrobe, including where to shop and how to style. While there was only a single plus-size model representing the big girls, it was still refreshing to hear women discussing the geeky things we love and how to show off our fandoms in a distinctly female way. 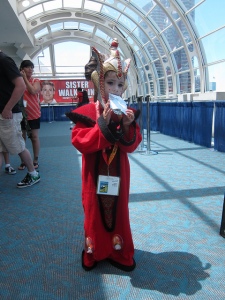 Not only are women breaking into fandom in a big way, but we are bringing our kids with us. On the “Raising Fankids” panel that I attended with Baby Diva and fellow English teacher, the Spaniard, we heard other teachers and parents discussing how to use our shared geeky interests to engage kids and get them excited about school. With a variety of types of classrooms represented–from parochial high school to public elementary–it was refreshing to see parents/teachers–moms and dads–using the unique dynamic of fandoms to engage kids in reading, math and history. One elementary teacher divides her 4th graders into reading groups ala Harry Potter Houses, while another uses Spock and Star Trek to teach Ethos, Pathos and Logos (an idea I’m totally stealing next quarter). The room was filled with parents of children of all ages, as well as teachers and educators curious on how to use fandom to instill confidence and positivity in young geeks.

What all of these panels have in common is a thread of understanding that the culture of fandom is shifting. It isn’t all about fanboys anymore, and the industry knows it. Nerd girls are not only mainstream, but we have money to spend and a strong voice on social media. We have kids we are teaching and who will become the future of these fandoms. Conventions such as SDCC need to continue to recognize the widening audience within fandom and shift their content accordingly, before we take our toys and move on to another sandbox.