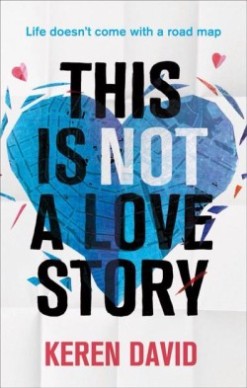 Kitty dreams of a beautiful life, but that’s impossible in suburban London where her family is haunted by her father’s unexpected death. So when her mum suggests moving to Amsterdam to try a new life, Kitty doesn’t take much persuading. Will this be her opportunity to make her life picture perfect? In Amsterdam she meets moody, unpredictable Ethan, and clever, troubled Theo. Two enigmatic boys, who each harbour their own secrets. In a beautiful city and far from home, Kitty finds herself falling in love for the first time. But will love be everything she expected? And will anyone’s heart survive?

During my recent internship at a literary agency, I was asked to read a lot of material, from completed manuscripts to unsolicited submissions. But of every book that crossed my desk during the last four weeks, the only one that made a lasting impression was Keren David’s This Is Not A Love Story. At first, I was only interested because David got her idea for her first novel while in a program at my university in London. But by the time I was half way through Love Story, I was hooked beyond belief. This diverse YA story is particularly relevant in the conversation following the landmark SCOTUS ruling on equal marriage rights in the United States. Here are three reasons to check out Love Story, especially if you are interested in representation and the elimination of bisexual erasure.

Unlike the majority of YA novels that dominate the market, Love Story takes place in Amsterdam instead of, I don’t know, Forks. It centers around three Jewish teens, all of whom have varying life experiences and friends from around the world. I can’t remember ever reading a book that discussed Judaism when I myself was preteen and teen, save perhaps Ivanhoe or Dreams in the Golden Country. This story’s frank discussion of what Judaism means to different people is both enlightening and a valid representation of a faith that is usually overlooked. (Also, the descriptions of Amsterdam will make you want to move there.)

The title says it all: even though this may be a story about love, this is not a love story. (It makes more sense when you read it, trust me.) Although Kitty, Ethan, and Theo fall into a temporary love triangle, nothing ends up the way you would expect a typical YA romance to go. Instead, this story is about dealing with real-life problems and learning how to bridge the gap between teen and adult. It is a realistic picture of how most teens think and function in that strange time before they must shoulder the responsibilities of being a grownup.

That’s right, Love Story doesn’t just feature one token queer character, but two. Ethan is openly bisexual, while Theo is realizing that he may be bisexual or gay. Although there are a few moments where Theo is conflicted about telling his family, at no point does the story center on anyone “coming out.” It was so refreshing to read a book where a character who doesn’t fit into the binary was simply allowed to exist. In other words, Ethan and Theo aren’t bi for the sake of being the “bi characters.” Their sexuality is a part of them, and it is beautiful. Considering the continual problem of bisexual invisibility in literature and various media, I believe that this mainstream YA novel can open doors for more representation in teen culture.

If you follow us on Twitter, you know that the London branch of The Collective attended last weekend’s Pride event! We took a million pictures and videos of gay love, and want to share them with you. Keep a lookout for a video highlighting our favorite parade moments. In the meantime, go read some Keren David!

P.S. SDCC is just a few days away! There is still time left to donate here.