Sherlocked has come and gone. Costumes were worn and photos were taken, but what I’m left with is a general feeling of dissatisfaction.

I wrote previously about my trepidation, and sadly, a good deal of it came to pass. Make what you will of the list below.

I would really like to know who ran this event, and can I please have their job? The convention was a disorderly disaster from the start. Here are two examples:

When we arrived with our tickets, we were given badges. Just badges. Not badges on lanyards. Just badges. I inquired after the lanyards, as it is customary to provide one so that con-goers can display the badge around their necks. They said they had run out. How on earth one could run out of lanyards when one knows EXACTLY how many badges one has sold and printed is beyond me. I asked where I could find one, and they said I would have to purchase one at a merch booth.

I wasn’t about to pay £5 for something that should have been included for free. I simply stuck the badge in my pocket. Besides, it’s not like they were checking badges anyway.

That’s right. There were people who were attending different conventions at ExCel that weekend who simply wandered into the Sherlocked area. Each time I entered, I would flash my badge at the volunteers manning the door—4 out of 5 times, they didn’t even glance at me, even though they were supposed to be checking each badge. So basically, I could have saved myself over £40, right?

Speaking of the volunteers: apparently none of them were given the proper tools to keep con-goers in line. Literally and metaphorically. When we went to get in line for Benedict Cumberbatch’s talk, we saw that people were supposed to be split up by badge category. Those who had paid more for the Silver, Gold, Platinum, etc. badges were to get the closest seats, and so on. The problem was that there was nothing in the room to keep the lines separate. Hardly anyone knew which line they were supposed to be in, and people wandered to and fro. Those of us in the weekend badge line were relegated to the edges of the room.

When they began to lead the first line of people into the area for the talk, about half the people in the other lines (who hadn’t been called yet) began to run for the door, desperate to get into the first line. Eventually everyone followed suit, which meant that the lines had absolutely no purpose whatsoever. Con-goers darted from one end of the room to the other, cutting here and there, with no regard to those who had waited patiently. Because there were no volunteers near our lines, and no barriers to keep the lines in place, the Collectress and I ended up near the end of the newly formed queue (if you could even all it that), and sat in the very back of the auditorium. Thinking of those who had ended up in the front thanks to the bedlam in the waiting area makes me wish I could turn into a green rage monster.

As soon as they released new batches of (expensive) tickets a few weeks before the event, I knew that overselling would be a problem. Sure enough, the sheer amount of people was overwhelming. The seats were so close together in the auditorium for the talks that there was hardly room to walk between rows. But perhaps a bigger issue was the amount of people who bought photo ops with Benedict. My friend and I were lucky enough to snag tickets from the new batches, but when we saw the line we weren’t too happy.

It wasn’t that the line was long. The problem was the speed with which people moved through the line. We could see the camera flashing every few seconds, and as we waited our turn, we wondered how much time we would actually get with Benedict.

Usually photo ops are short—there are lots of people in line, and there is a schedule to keep. But in the past, my friends and I have at the very least had the chance to make eye contact with the person(s) in question, say hello, and ask for a quick pose. Remember Burcon? Things were the polar opposite at Sherlocked. Due to the huge crowd that had bought tickets, they were running everyone through the line as quickly as possible. Let me break it down for you.

I think I got 5-10 seconds with him. There was no time to ask for a pose, or even to say hello. It was the quickest experience of my life, and I don’t even remember half of it. (I will say, though, that he smells lovely.)

I was lucky when I took my photo, as I managed to smile in the direction of the camera. My friend, whom I’ll simply call the Minnesotan, wasn’t so fortunate. When she was pulled from the queue and pushed into Benny, she was pushed a little too hard. She stumbled into him, and was mid-apology when the photo was taken. The photographer did not check the frame to see if the picture turned out, and they printed an atrocity. Cringe-worthy. We had to insist that they allow her to retake the photo. After all, she had paid £45. After being sent from person to person, the man in charge finally admitted that the picture was bad enough to warrant another attempt.

Though my experience with photo ops may be limited, to my knowledge, the photographers usually check the picture before moving the next person through. I shudder to think of all those who received less-than-stellar pictures, and weren’t as lucky as the Minnesotan to get a second chance.

5.) The Merch Booths and “Exhibitions”

We had a feeling about the parts of the convention that weren’t talks, and we were more right than we wanted to be. There were a few merch booths with nice things, but the majority of it was either repeated from one table to the next, or already available online. There was nothing to represent other fandoms, despite the fact that there were people who had cosplayed things other than Sherlock. We spotted a few Bilbo Bagginses, and even a Khan.

So what was there to do once you’d looked at all the merchandise? Not much. The free exhibitions were second-rate; there was a wall representing John Watson’s life before he met Sherlock, a door with 221B on it where you could take a picture, and some set reconstructions that didn’t look terribly realistic. In my opinion, the only exhibit worth any time was the one displaying props and costumes (although there were parts of that that were also lacking—seriously, just let me plan the next one). 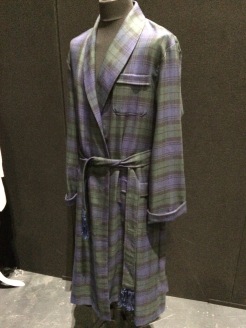 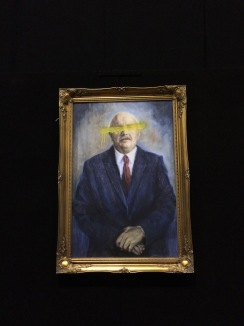 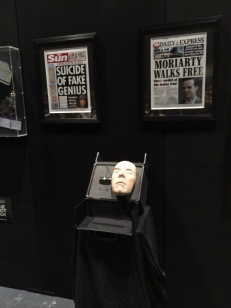 There was one saving grace to my experience at Sherlocked, and it was Benedict Cumberbatch. Although I wasn’t truly able to interact with him, he was as gentlemanly as could be during the rushed photo ops. He was also very charming during the talk; he was thoughtful about some questions, funny about others, and overall a joy to observe. He confessed that he had a head-cold, and chances are he was still jet-lagged from his recent trip to China, but despite all those things he remained pleasant and engaged. He even opened up a little bit when the questions strayed from Sherlock, saying that he was married to a very intelligent woman (can we all squee for a second about how cute he and Sophie are?) and that he was both excited and scared to meet his future child.

“I feel like I’m about to have a really nice picnic with a shark in a park” Benedict, on becoming a father #sherlockedevent

Although I’m glad that I got to see Benedict in person, nothing will convince me otherwise about Sherlocked’s ridiculous prices, con-goer hierarchy, and lack of proper organization. In order to truly give all fans a good experience, Sherlocked needs to take a note from other conventions before trying again.

The game is on,

Did you enjoy our Twitter coverage of Sherlocked? Help us out at SDCC!