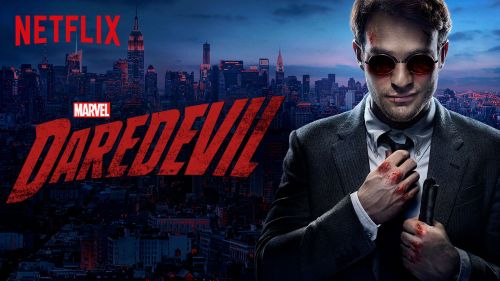 While I’m definitely a binge watcher during the off season at work, I decided to review this particular show not as one big she-bang, but in parts over a series of weeks. This system relieves the pressure of having to binge watch the entire season, while allowing me to marinate on the themes and characters of this new Marvel phenomenon. Let’s get started, shall we?

Read my recaps on episodes 1-3 here.

Episode 4: In the Blood

This episode gives audiences a more in-depth look at the villains of Hell’s Kitchen, and we again get a flashback, this time, to the Russians in a faraway prison. The brothers are the same guys who are trafficking sex workers, and the flashback lets us know their bond is strong and they will go to great lengths for one another.  The Russians kidnap Claire (!!), who manages to call Matt as she’s being attacked, and he uses his super hearing to find her. The Russians get a pretty good beating, and I love that Claire, while distressed, isn’t much of a damsel. She knocks out Vladimir with the same baseball bat he threatened her with and again we see that she, too, has a penchant for violence. It is a testament to the environment of HK that those who grew up there have the ability to kick some serious ass. Matt takes Claire to his home, fixes her face up and tells her his REAL name.

We finally get to interact with Fisk in this episode, and that pathetic/creepy vibe is still going strong. He takes Vanessa the art dealer on a date and Anatoly interrupts, embarrassing Fisk. The Big Bad, who is socially awkward and believes HK needs to burn before it can be rebuilt, loses control and smashes Anatoly’s head in. 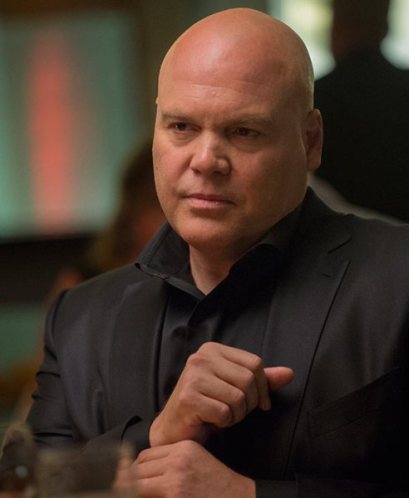 I like Fisk. He’s a creeper, but I can’t help love the way D’Onofrio plays the character. He is vulnerable yet violent, complex yet driven by simple desires. I’m excited to see his progression throughout the season. I find it so interesting that the writers are exploring his relationship building and social skills. The ineptitude is juxtapositioned well against his viciousness as a crime boss in HK. I like it. I also hope Claire is in every episode. I hope we get to see her story develop and find out more about her past. I needs it!

Although the Russians have been working with Fisk and his team of villains, their wildcard behaviour (and the embarrassing date interruption, me thinks), causes Fisk and the others to cut the Russians out of the crime business. Fisk stuffs a black mask into a dead Anatoly’s jacket, framing the vigilante for the murder of Vladimir’s brother. This tactic causes the Russians to become distracted by their revenge mission, giving Fisk the chance to blow up their holdings across town and kill pretty much the whole crew…except Vladimir.

As Hell’s Kitchen is burning, Vanessa and Fisk are out on yet another date, and, when Fisk tells her that the people burning are those who kidnapped that young boy (in episode 2) she simply murmurs, “Good” and suddenly, her moral compass is shot to hell. I like her and at first feared for her safety, but she’s making her own choices and Fisk has promised never to lie to her. I think she may be in it for the long run. In the meantime, Matt has Vladimir trapped in a warehouse, within which he too is trapped, with dirty cops and not so dirty cops, surrounding the building. With the help of Vlad, who takes a while to be convinced, but finally believes that Fisk is the one who killed his brother, Matt gets out of the building, but not before Vladimir gives him the name of Fisk’s accountant and is killed by cops. The episode ends with Matt trapped outside by some very pissed off police officers.

The show keeps getting better. This episode balanced well the intricacies of the streets of HK, including the vigilante, the criminals and the good guys. We get to see Froggy, Karen and Claire meet at the hospital, as they are all trying to help after the explosion. Having all three in the same place while the vigilante/Matt/Daredevil is out fighting the good fight is an interesting and thoughtful parallel. It makes me wonder, now that Matt and Claire have kissed (I ship it), will these 4 ever be in the same room together? I really hope so.

The episode begins with Matt kicking serious crooked cop ass, of course. Duh! He fights! By the way, I love the fight scenes, have I said that yet? This one is pretty dark and the masked vigilante doesn’t hold back once he finds out the cops are on on Fisk’s payroll. Vlad dies, but not before he can whisper to Matt the name of Fisk’s money man. These two developed a begrudging trust throughout the episode, and, although I didn’t expect Vlad to actually give up anything, I was pleased when he did, but not before doling out sage advice,

The moment you put on the mask, you get into a cage with animals.”

In the meantime, Foggy and Karen are at the hospital with a client and they run into Claire. They don’t speak, much, but the fact is, Hell’s Kitchen can’t be that big, right? Matt and Claire did kiss, plus she knows his “secret identity”. This could get interesting. 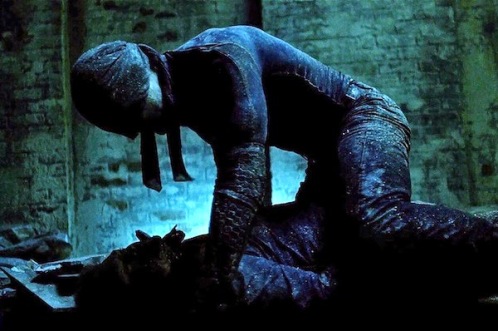 I really loved the exchanges between Vladimir and Matt. While they don’t exactly hold the same beliefs, Vlad recognizes that Fisk is a threat to the city. The fact that he goes out shooting was pretty perfect and I almost didn’t hate the sex trafficking gangster/murderer.

I’m blase about the Froggy/Karen storyline, especially now that it seems she’s kinda leading him on to ask questions about Matt. On the first date? Not cool, Karen. I don’t like the idea of Foggy getting strung along…I’m starting to become partial to his adorable hair.

Onward and upward, my friends. I plan to watch episodes 7-9 and write about it next week, Friday. See you then, my little Daredevils.

Find me over on Twitter and Tumblr for more Marvel madness!