I received the distinct pleasure of attending a special Los Angeles screening of Insurgent, the second film in the adaptation of Veronica Roth’s Divergent series. The screening, held at the Pacific Theater at The Grove in Hollywood, was filled with screaming teens, social media influencers and radio station DJs hell bent on riling up the crowd more than they already were. I attended the screening with my daughter, a fan of the films and Ansel Elgort, and it seemed my twelve-year old is pretty much the demographic of the film’s target audience. Insurgent (PG-13), which opens nationwide Friday, March 20th, is a dystopic adventure film, featuring some of today’s hottest actors, including protagonist Tris Prior (Shailene Woodley), flashbacks of her mother (Ashley Judd), twin brother, Caleb (Ansel Elgort), love interest Four (Theo James) and various other familiar faces from the first installment film, including Maggie Q, Kate Winslet, Miles Teller, Jai Courtney, and Mekhi Phifer. As with any trilogy, it is necessary to have seen the first film in order to understand the themes and focus of this one. Without knowledge of the first film, the conflict between factions and family makes absolutely no sense, and the entire story loses power.

Some vague spoilers ahead… 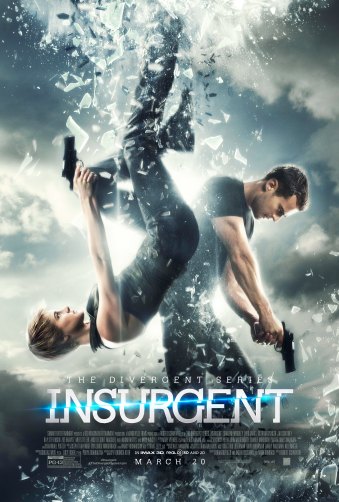 If you’ve read the books, you might be a little disappointed in the representation the movie presents, but, as bibliophiles already know, there usually isn’t enough time to recreate a text on-screen, nor should we want it to be a carbon copy of the book. What is unique about film adaptations are the visual effects, the acting and character interaction as well as music and setting. What I most appreciated about seeing the book come to life on the big screen has to do with the setting and visual effects. Each faction; Abnegation, Erudite, Dauntless, Amity, Candor and the Factionless, are represented in color usage as well as unique texture within the setting. With Amity, who work with the earth and therefore are surrounded by natural colors, we see wood, dirt, browns, with yellows and oranges to represent the earthen tones. The Factionless live underground, and are represented with blacks, greys, metal, rock and cement, and so on for the other factions. Kathy Lucas (set decoration), Louise Mingenbach (costume design) and Alec Hammond (production design) did excellent work putting together a realistic society as much defined by their similarities within factions as their differences outside of their own factions. Not only are the settings and costuming impressive, but special effects that we get to see with the simulations are still as interesting as they are in the first film. James Madigan (special effects director) wows audiences with large-scope imagery that takes us inside the mind of a Divergent, and the scenes in the sim are intense and downright scary to watch. While made for 3-D, I watched in 2-D and it worked just as well.

The themes of this second installment are much darker than the first, weaving questions of purpose, truth, lies, family and death throughout the entirety. Each character is forced to look within themselves for clarity, and, in a society where individuality is not allowed, the process is a difficult challenge that not all characters are up to.

While I am always one to extol a text before the film, I can appreciate the care that cast and crew put into making this middle section to Veronica Roth’s larger story. The story of Tris, Four and the factions of dystopic Chicago raise questions of not only individuality, but also government control as well as familial bonds versus societal purpose. If you enjoy the first movie, you’ll like this one, but I highly recommend reading the books for a more in-depth analysis of the themes and less kissy-face between two hot teenagers.

Definitely factionless, find me over on Twitter and Tumblr waxing eloquent about…stuff.