As the narrative of the Tribe moves forward, we begin to understand the depth of fear and mistrust that is built into these individuals, who have lost so much yet continue to move forward. To survive in the post-apocalyptic society, one is forced to make decisions against others quickly and without mercy, which is why Rick Grimes began to implement his “3 questions” routine with strangers.

How many walkers have you killed?

How many people have you killed?

The significance of these questions is not in any right or wrong answer. The importance stems from the honesty behind the answers, because dishonesty holds distinct ramification of not being allowed to join the tribe. The consequences, positive or negative, come from how an individual navigates the answers and reasons behind the question.Each member of the Tribe has had to kill at one time, including the living and/or dead. By contemplating these 3 points, an individual is forced to look inward. What is she capable of? What is she not strong enough to do? And, of course, why?

After Carol saves the Tribe from Terminus, they travels through the woods, searching for safety. Carol has been on her own, and so, when Rick asks to join her faction, he is essentially acknowledging Carol, not only as part of the group again, but as a leader. In fact, the Tribe is full of leaders, skilled in survival–but surviving is not the only thing this group is capable of. They are strong and they are smart. With their available resources, they just might be able to save the world, one person at a time.

When the Tribe come upon a preacher fighting for his life, Rick asks him the 3 questions, after taking care of his walker problem. The preacher’s answers? None. Neither. Ever. In a post-apocalyptic society, everyone has done something questionable–something they are not proud of. We are reminded of this motif with the first woman we saw Rick ask these 3 questions to, and again when Carl asks his father what they should tell people about what they’ve done. That Gabriel doesn’t admit his “sins” (even to those who saved him and directly ask) is worrisome. Secrets do not bode well within the Tribe, which we saw with Carol’s exile. Why this group is working so well together is because they can share the secrets that need to be shared. Carol told Tyreese she killed Karen, Tara told Maggie she was with the Governor when he killed her father. By sharing their weakest and most fearsome moments, they Tribe grows closer and strong.

So, what could be so horrible that Preacher Gabriel doesn’t think a band of seasoned killers would accept him if they knew?

In a world in which hope can seem foolish, the Tribe has decided to be the group who helps others and who sticks together. With a new mission–to deliver Eugene to Washington D.C., to an outpost with food and resources–the choice to remain the type of people who give instead of take is a conscious one. While Rick has been against traveling to D.C. for a cause they cannot be sure about, he, as well as the other Tribe members, vote to take the chance and it seems the desire to “fix” the world is still strong.

Hope for normalcy in a post-apocalyptic society, however foolish, has kept members of the Tribe moving forward since they encountered the travesty of the Atlanta CDC. But an even more unattainable dream may be the idea that society will be able to rebuild. With the types of organized societies that the Tribe has encountered–Terminus, Woodbury, the outlaw tribe–how can the world return to any sort of normalcy after the things that have been done? Even with Rick’s 3 questions, however they are answered, how does one come back from the extreme actions taken during such a tumultuous time? 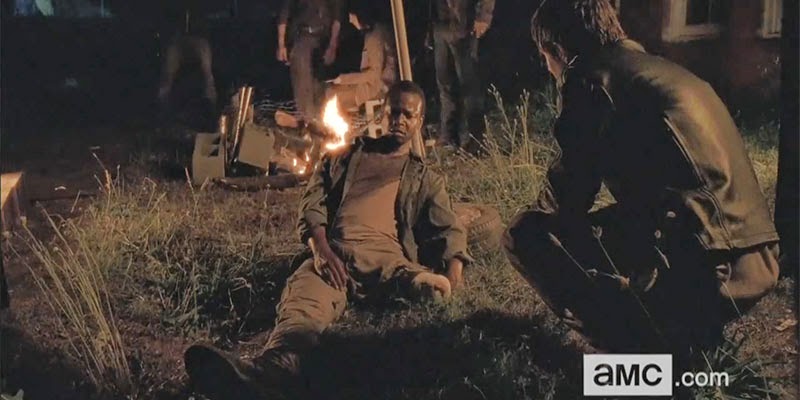 While the 3 questions serve to remind individuals to moralize their decisions, sometimes there are no justifications. For Gareth and the Terminus tribe, no reasons, excuses or rationalizations can excuse killing and eating another human being. The stalking of the Tribe and kidnapping of Bob (and subsequent chowing down on his leg) shows that even the most organized, well thought out communities can be pushed, pulled and prodded to the dark side. The past shapes who we are as humans, sometimes irreversibly so. With the Tribe making the conscious decision to work toward a greater good, will such a broken down societal structure allow that to happen?