I’ve always been kind of a lit and television nerd, even before the connotation became a positive one. I graduated with a degree in Writing and an MA in Literature, because reasons. I used to go to the library in the summer with my grandmother and check out the maximum number of books (12) and get everything from Stephen King to Choose Your Own Adventure books. I was the child you might find in the corner of the football field with a book in hand while the other kids played softball all around me. My mom raised me on Star Trek, Batman and Indiana Jones, she always encouraged me to be passionate about the things that interested me, and still reminds me to be proud of who I am and what I love, regardless of what others have to say.

As a parent of a pre-teen girl, I do my best to encourage my daughter to find joy in all types of activities–from reading books to shooting a bow and arrow. She is my roll dog; we go everywhere together. I want to go watch Classic Who at NerdMelt? She’s coming. There is an Dr. Seuss inspired art opening at the museum near our house? We head out together. I want my daughter to know that I am passionate about the things that I love, and she can be too. I try damn hard to make her feel accepted and loved regardless of how I feel about her hobbies. As long as it’s age appropriate I could give a damn if she likes Minecraft, the Ninth Doctor or baton throwing (none are my “thing”). In fact, I encourage her to take up her own activities and to think independently so as not to get bogged down by that “crowd” mentality that comes heavy in high school (oh gawd my baby’s going to high school in 3 years) and so that she starts to figure out what she likes and who she is NOW, because it gets harder before it gets better. 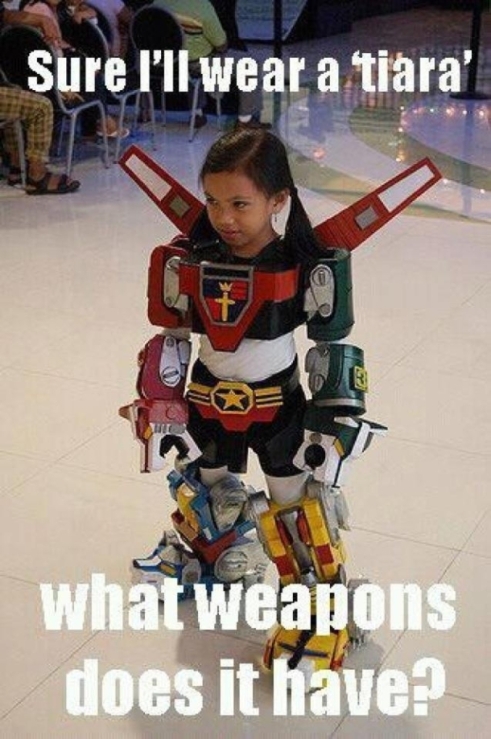 So, when the Lady Avengers and I decided to to a group cosplay and I knew I planned to bring little Baby Diva to WonderCon with me, I, of course, decided she would cosplay Hawkeye. I promised to buy her a bow and arrow, which she loves to shoot, and that the outfit would be super awesome, with The Collectress’ assistance, of course. Baby Diva smiled and went along with this idea for about a week, until she sweetly told me she didn’t want to be Hawkeye, she wanted to cosplay Katniss Everdeen.

I ultimately agreed that she could dress however she wanted. Cosplay is all about fantasy and imagination. How can I expect my daughter to be unique if I force my idea of geekdom on her? As soon as I acquiesced, she began to work up a contagious excitement for the experience of WonderCon. She Googled pictures and had a vision of what she wanted her Katniss to look like. With the help of JacksQueen (Lady Loki), Baby Diva and I scoured the thrift stores, bought a functional bow and arrow at Big 5, borrowed combat boots and got a friend to do an authentic Katniss arena braid. Baby Diva looked awesome and felt good about herself. That makes this nerd mom happy.

The thing is, while being a girl is hard, being a geek girl can feel almost impossible. Girls enter geek culture under the shadow of “Does she even watch Classic Who?” and “No way she’s a real gamer”; sentiments that are meant to keep us on the outside looking in. The patriarchy is real, folks, even in geekdom. Still, in recent years, female comic writers, cosplayers, and proud lady geeks have become mainstream. Felicia Day is on Supernatural nerding it up and Chloe Dykstra has her own cosplay television show–shit is real, friends. So, why are women still being marginalized in geek culture? Why are female comic book writers and show runners still talking about the status quo and the fact that there are so few of them in the business? I don’t have an answer that will sound unbiased and logical–because the situation is full of prejudice and absurd. Nerds are traditionally the outsiders–considered Other in literary terms–and thus the female can inherently identify with this representation after dwelling in this sphere since mother Eve. Women remain alienated, considered suspicious and less than, even in a space defined by other-ness. I’m not trying to rant. I even made it a point to keep this post short and sweet. What concerns me is our daughters. The girls who are grilled by their male peers when they claim to like video games or are made fun of because they read comic books and watch British television. So what? In the long run, we are all individuals with the capability to make our own choices and develop our own, unique values. Rendering invalid the passions of others will never strengthen one’s own resolve.