King Shithead is dead, and now begin the repercussions of his untimely murder. Joffrey was a Lannister and Lannisters always pay their debts, and when lions are in pain, they lash out violently. This episode focuses on bondage, both newly formed bonds or breaking free from established captivity. Let’s travel the Seven Kingdoms, shall we? (Spoilers ahead!) 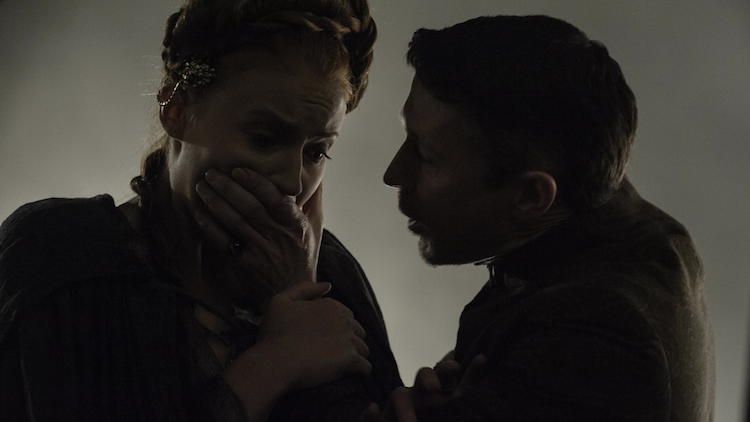 Immediately after the death of King Joffrey, Sansa is whisked away by her fool-knight Ser Dontos, who was apparently working for a man we see for the first time this season in this episode–Petyr Baelish or, “Littlefinger”. Littlefinger has been notably absent for the festivities at King’s Landing this season and it looks to be because he’s been setting up Sansa’s rescue. Littlefinger is a childhood “friend” to Catelyn Stark, and so Sansa believes him when Littlefinger tells her he means to rescue her from the wrath of the Lannisters, who most likely blame her, along with Tyrion, for the death of Joffrey. Littlefinger takes credit for killing Joffrey, giving Dontos the necklace that held the poison and for paying off a ship’s crew to take them away from King’s Landing. Unfortunately, Dontos doesn’t make it onto the boat. Baelish has his man put an arrow in the poor fool,

“Money buys a man’s silence for a time. A bolt in the heart buys it forever.” -Petyr Baelish

For all of his truths, LittleFinger also reminds Sansa that everyone at King’s Landing is a liar. Does this include him? I think it does and, although we don’t know where he is taking Sansa or what his end game is, we are certain to find out that his motives may be less than stellar.

In the meantime, Margaery Tyrell-Lannister wonders if, because her husband died before they consummated their marriage, she is actually queen. The short answer is, not really. No way Cersei is going to allow the young lady who stole Joffrey’s affections to sit on the Iron Throne. While the Queen Regent is currently busy grieving, I have no doubt that soon Cersei will be back to her evil antics, wrongfully accusing one brother of murder while asking the other to avenge their son’s death. Speaking of Jamie Lannister (trigger warning) this episode took a dark turn when Cersei and Jaime Lannister meet in the sept where Joffrey’s body lay. While Tywin steps away with his grandson, the new child-king, Tommin Lannister, to explain the birds and the bees, Jaime and Cersei have a moment alone with their son. As I’ve said, the GoT books and the show don’t always match up, but I felt this scene did a huge disservice to the character development of Jaime Lannister since the Kingslayer lost his hand and was forced to examine his own morality (and mortality) in his time with Brienne of Tarth. In the books (I’m currently reading book 5) and in the previous season, Jaime develops into a more sympathetic character as we delve deeper into his emotional state. Yes, he is in an incestious relationship with his sister and yes, he killed the Mad King, but he also saved Brienne and made a vow to Lady Stark to protect the Stark girls–a vow he seemed keen on keeping until Sansa disappeared from King’s Landing. He seems torn between loving his sister in a very inappropriate way and being an honorable man. Unfortunately, the character lost my sympathy vote when he forced himself onto his sister under the dead body of their son on the sept floor. While Cersei seemed to enjoy the kissing, she clearly asks her brother to stop, saying it isn’t right–whether she meant it was wrong to get physical on the floor of their son’s tomb or to continue the incestious relationship, viewers cannot be sure. This was a squick moment for me, and I wonder why the showrunners made this obvious deviation from the text when we were just starting to warm up to Jaime Lannister. If a rape scene was the only way that the director/producer/whoever felt able to get across the frustration that Jaime feels toward his sister, the anger that he needed to project to her–well, I call that laziness at its worst. The scene in the book, while disturbing and graphic, focuses more on the shared grief and loss the pair feel and less on Jaime’s need to force Cersei into a submissive role by having non consensual sex with her. I’m still going to watch, I’m just disappointed and a bit put off by the choices of the show’s creators, at this point.

Speaking of choices, Tywin makes a calculated decision to ask Prince Oberon from Dorne to judge Tyrion’s trial and to sit on the Small Council. When Oberon asks why Tywin would suddenly have so much respect for Dorne, the King’s Hand admits that he needs Dorne because they are the only kingdom in all of the seven who have fought and won in war against the dragons. The Lannister patriarch knows full well the power that Daenerys brings with her in the 3 dragons she possesses and needs the rebel kingdom to unite with the others, so that they may forge an alliance strong enough to defeat Daenerys and the army that marches with her. For Tyrion, this means that all of the judges on his trail work for his father and will vote however Tywin wants, which doesn’t bode well for our favorite little lion. I, for one, have full faith that Tyrion did not kill Joffrey. As he put it, if Tyrion had planned a royal assassination, he wouldn’t be standing there like a fool when the King died. Very true; Tyrion is much smarter than that. So much so, he tells his loyal squire, Podrick Payne, to be careful of THE OMINOUS “THEY” and get out of King’s Landing before someone tries to kill him. Pod admits that someone already tried to bribe him with a knighthood if he claimed to be present when Tyrion purchased the poison which killed Joffrey. Podrick refused the offer, and so Tyrion tells the squire he must leave and that this is their last meeting. Without Bron, whom is also under questioning for killing the King, Pod or Shae, it seems Tyrion is on his own. Tyrion’s only hope for alliance at the moment is his brother Jaime, who is obviously dealing with some mental issues that he needs to work out before trying to assist the person whom his sister/lover/victim is now trying to see hanged.

Far from King’s Landing, Arya and the Hound head to the Eyrie. On the way, they stop on the property of a man and his daughter, who feed and house the pair for the night. Quick thinking Arya lies and tells the land owner that they are father and daughter, and that her “father” fought for House Tully. The man asks them to stay and even offers the Hound a job on the farm. The vicious man, who kills indiscriminately and seems to have no moral compass except Arya, robs the man and tells Arya, although he is no thief, the man and his daughter will be dead by winter because they are weak. Dead men have no need for silver, and so the unlikely travellers continue on their journey, and Arya renews her hatred for the man who killed her friend, kidnapped her and plans to sell her to family members in the Eyrie.

At Castle Black, the Crows are preparing for the impending arrival of the Wildling army. Ygritte and the Wildlings are getting to greener areas and laying waste to villages along the way to Castle Black, murdering and pillaging (and some are cannibalizing) all that is in their path. A boy who escaped with his life to the Crow castle tells of the tall, creepy Wildlings who promised to eat his dead parents, which, understandably frightens the Night’s Watchmen, who desire to flee for help. Jon Snow admits he lied and told Mance Ryder that Castle Black housed over a thousand Crows, when in reality there are only 100 or so men defending the Wall. They must not only fight, but travel to Caster’s Keep to kill the mutineers that know the truth about the Night’s Watch. If Mance finds them first, he will torture the truth out of them and then attack the Wall with all his forces. Forging the Wall has become an almost impossible task. The Crows are slaves to their post, yet will soon be forced to leave in order to save it. Pushing away in order to keep safe is a theme of the North, and so goes Gilly and Sam.

Sam wants to protect Gilly from his Crow brothers, who taunt her and threaten to show her a good time, whether she wants one or not (what is with the rape culture, GoT?). Wisely, Sam moves Gilly and little Sam (awww) away from Castle Black and into the village inn, where Gilly can whore herself out if Sam decides that is what HE wants. He doesn’t, because he is a gentleman, and only asks for room and board in exchange for her babysitting services for the other women. Gilly doesn’t seem to pleased that she and her son will be separated from Big Sam, and so the two leave it on not-so-great terms, although he promises to visit as often as he’s able.

At Blackwater Bay, Ser Davos is learning to read with the princess and arguing with her father about the necessity of a good army. Now that Joffrey is dead, Stannis has an opportunity to claim the Iron Throne and he does not want to lose any more ground. Still, he refuses to buy an army yet cannot rustle up enough support within the surrounding houses. Davos makes a wiley decision to contact the banks and sell swords at Bravos without Stannis’ consent. As touchy as Stannis is these days, secreting an army behind his back might just put Darvos on the pyre, sacrificed to the Lord of Light at the whim of the Red Woman.

Across the Narrow Sea

In the last scene of this episode, we finally see Daenerys come to the next slaving town on her journey. The Meereen elite send out a champion to insult and fight the Khaleesi’s bravest warrior. She sends Dahaario Naharas, who expertly throws his blade–killing and dropping the rider’s horse, and chopping off the champion’s head in one swift movement. It is a brilliant scene, which reveals Daharrio’s skill as a fighter and his loyalty to Daenerys. In this sweeping setting, the Khaleesi addresses the slaves of Meereen, telling them of the all those she’s already released who now fight behind her. With dramatic effect, she tosses at their walls barrels filled with ex-slave chains, metaphorically promising freedom if they follow and fight for her.

This season promises to break the bondage of some while ensuring that of others. We will have to continue watching to find out who will win their freedom.

**all images property of HBO