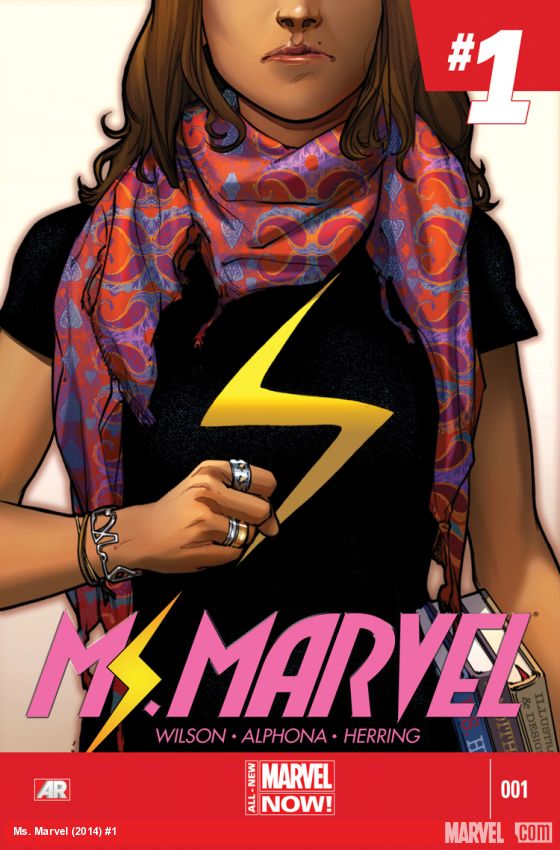 So, I bought a comic.

I haven’t purchased a comic book since I bought my last Archie at the grocery store check out line back in 1992. For me, the world of comics is intense and so expansive, it is hard for me to know where to start. So, I peruse the aisle at Meltdown Comics, wistfully picking up an issue of The Walking Dead comic with the realization I will never get into what I think is still a pretty cool past time. I appreciate the aesthetic, plus, anything that gets kids reading in  2014 is definitely worth my time, but I never got past my Archies and the occasional X-Men comic. So, a few months ago when I heard that Willow Wilson planned to reboot Ms. Marvel by creating her as a 16-year old Muslim nerd from Jersey City, I was excited for the opportunity to discover something new and enter into a world I’ve always kinda wanted to live in. Also, a minority, religious female comic lead penned by a Muslim female writer? Definitely intrigued.

Willow Wilson, born and raised in New Jersey herself and a recent Muslim convert who spent years in the Middle East as a correspondent, penned the series not as a political statement, but to show that for the comics’ 16-year old heroine, Kamala Khan, the Muslim religion is only part of the superhero’s story arc. Still, the release of issues #1 (January 2014) and #2 (March 2014) happens at a time when there are not too many Muslim writers or superheroes in the comic book game. Willow cites The Burka Avenger (July 2013), a Pakistani cartoon in which the female lead fights evil with books, pens, and acrobatics, and Qahera, an Egyptian comic book heroine who protects women from sexual harassment, as inspirations to her work. For Wilson, Kamala is a minority in more ways than one, which is why the character is so passionate about not only fighting crime, but her family, culture and, of course, the business of being a superhero.

And Kamala Khan is definitely not your typical Marvel superhero. The character is a geek girl of the 21st century who feels disconnected from society not only because of her super secret, but her religious beliefs and a teeny obsession with the superheroes (who are real in her universe) that she writes fanfiction about. Yes. Kamala writes Avengers fanfic. She also lives in a world where Captain America and Thor fight crime right across the Hudson River, and so the expectations placed on her as a woman, a daughter, a Muslim and a super hero are unique and engaging.

So, I bought a comic.

Not because I want to finally be one of the cool kids, or because I am an advocate for equality regardless of sex, age, religion, sexuality or race (although I do and I am), but because I can relate to this character, and I think my daughter can too. Ms. Marvel doesn’t necessarily fit comfortably into any particular sphere, yet she has found her talents–fighting crime and writing fanfic–and decided to use them for the greater good. Perhaps she is the typical superhero after all, just in a different packaging. Wouldn’t that be novel?