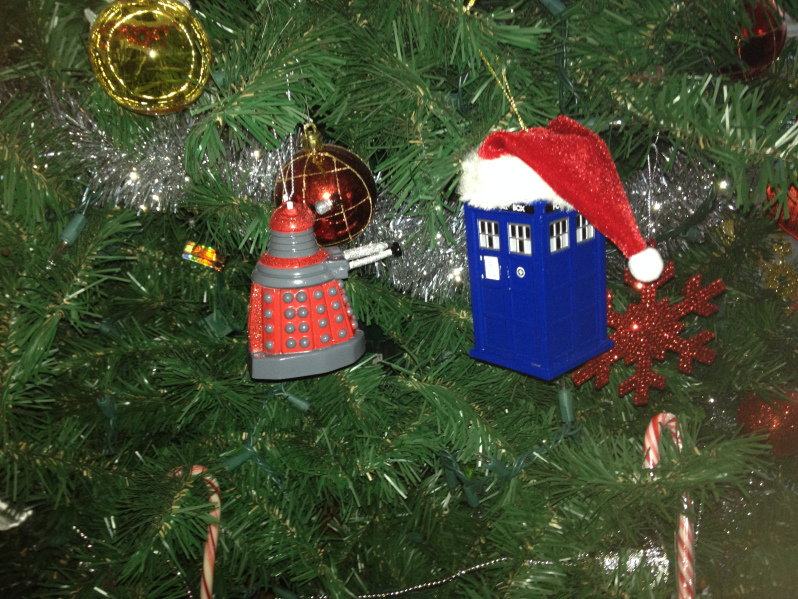 A few months ago, I asked my nephew what he wanted for Christmas. “I want the sonic screwdriver,” he said.

“Which one?” I replied. (At five years old, Jacob is one of the most prolific Whovians I know.)

I ordered him a sonic screwdriver off Amazon the next day. Bam. Christmas shopping done. But then, I did a silly thing and left the screwdriver in a place where any five-year-old could find it: right next to the Wii. From my silly mistake spawned a wonderful idea that encompassed the gift giving for both Jacob and his mother: a Whovian Christmas.

Phase One: The Idea

The Collected Canadian had the idea, I must say. We were brainstorming gift ideas for Jacob’s mom, and the Collected Canadian said, “You know, I bet she’d love a Doctor Who-themed photoshoot. She’s always saying she needs pictures of all of us together.” Bam. There it was. We’d all dress up like Whovian characters and do a photoshoot. We all know how much I love my cosplay, right?

Phase Two: Putting the Pieces Together

Now came the hard part: putting it all together without my sister (and housemate!) knowing. We started small, by first implanting the idea of buying Jacob a Doctor outfit to go with his sonic screwdriver. We decided on the Eleventh Doctor, because Jacob really likes his fez. (Fezzes are cool, don’t ya know…)

So, being the most amazing aunt in the universe, I made a fez. I hadn’t used a sewing machine in over ten years, but I am quite proud of the result. I used the tutorial over on Tally’s Treasury.

Then the Collected Canadian and I obsessively stalked thrift stores until we found an appropriate outfit for the Eleventh Doctor (pictures will come later in this post!) Things were coming along swell. I even got Jacob’s future step-dad in on it. And about a week before Christmas, he and I ditched work to make this for our photoshoot.

We bought a couple yards of fabric, I pulled out the trusty sewing machine, and we made ourselves a Gallifreyan family crest using cardboard stencils and spray paint. This banner is now currently hanging up in my living room. Not bad, eh?

Now, because Jacob had already seen the sonic screwdiver I’d ordered for him, I decided to convince him that the Doctor would bring him another, newer sonic screwdriver. So, instead of writing a letter to Santa, we did this: 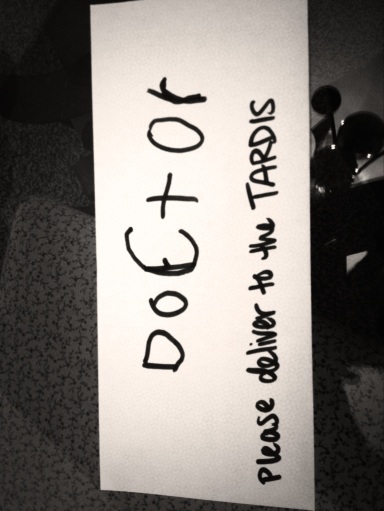 (Jacob dictated the letter.) Jacob’s mom helped me put together Jacob’s Doctor outfit, but she had no idea what was in store for her.

Phase Three: The Plan In Action

On Christmas Eve, Jacob and I put out a plate of cookies for Santa and a plate of jammy dodgers for the Doctor. Jake was very adamant that the Doctor get more biscuits than Santa (we had to put out extra for Clara, of course). We also hung ornaments of the TARDIS and a Dalek (pictured above) so that the Doctor would know he was in the right house. 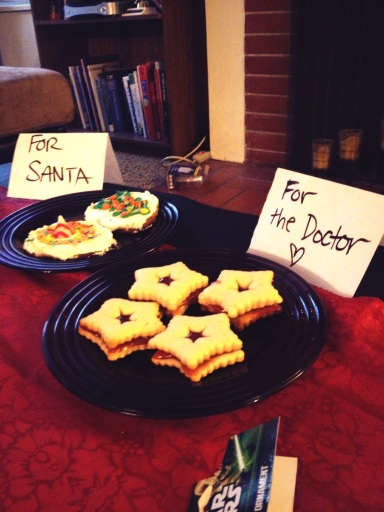 That night, after Jacob and his mom fell asleep, the Collected Canadian and I became like helpful Oods and granted Whovian Christmas wishes to our housemates. For my sister, an Amy Pond plaid shirt for the photoshoot and a card explaining its purpose. 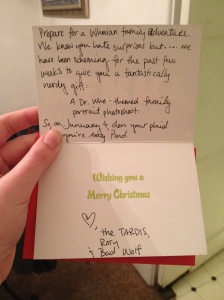 And for Jacob: a Doctor outfit, a sonic screwdriver, 3-D glasses, a fez, and a note from the Doctor. 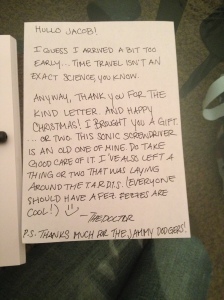 When Jacob woke up Christmas morning, we played the sound of the TARDIS ridiculously loud in the living room. And my weeks of hard work was paid in full when I saw the ginormous smile on that kid’s face, and the look of sheer amazement on his mother’s. In other words, I done good. Real good.

Stay tuned for an update on my Bad Wolf cosplay for this photoshoot!

And isn’t my nephew the most awesome child ever? (Not that I’m biased or anything.)