So I went home last night with the intention of writing something thought-provoking and borderline academic for y’all. I had an outline in my head and everything….and then I turned on Netflix.

You know what that means. 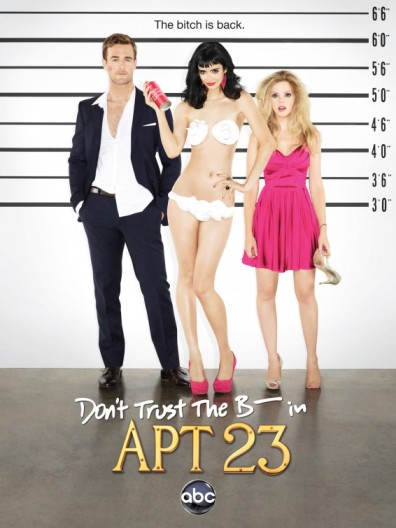 Now, if you’ve been to our blog before, you may have noticed that I feel rather strongly about how the media portrays women. I mourn the lack of quality, diverse women on the big and small screen, and I look forward to the day when someone hires me to pen the world’s next big thing, featuring a female lead that’s kick-ass and womanly.

So why watch a show that is, to quote a friend, “so obviously and disgustingly anti-feminist and shallow?”

Now, I can see why this show would be criticized. The “B—-“, Chloe (played by Krysten Ritter), is rude and obnoxious. She parties hard, has sex with strangers, and generally cares about no one but herself. Her best friend is Dawson’s Creek star James Van Der Beek (played oh so satirically by James Van Der Beek). She’s shallow; she’s selfish; she’s mean.  She is the epitome of the entitled white girl who lives the “fabulous life” and cares more about her shoes than world hunger.  She’s the kind of person I would never want as a friend.

She’s the kind of woman that we don’t want present on television representing all women, right?

Actually, I think she’s got qualities that more female characters should have. The great thing about Chloe is that she doesn’t easily fit into one of the four boxes that Hollywood producers usually like to cram their female characters into (special thanks to Amber Heard in “Syrup” for pointing this out).

She’s not a mother (well except for that one time she got a foster kid as a personal assistant). She’s definitely not a virgin. And while she may be sexually liberated, she doesn’t quite fit into the “slut” category either.

This leaves her with the box she fits best into: the b***h, which the network and showrunners were more than happy to label her as because, hey, it’s scandalous and a little bit naughty. But you know what? Our first impression of Chloe may be “oh my god, she’s such a b***h!” but by the end of the first episode we learn that even though her methods may not be wholesome (or legal), her intentions–when not self-centered–are in the right place.

So, sure, the girl has her faults. She’s got “Chloe” put at the top of her priority list and everything else comes second. She’s sardonic and really doesn’t care if people are offended by what she says.

But she’s also a confident and smart woman who knows what she wants, and I can’t help but wonder if it’s these qualities and her no-nonsense personality that get her labelled as “the b***h.” If they are, maybe I need to embrace my inner bee-yotch a little more.

Disclaimer: I own none of the pictures or clips. If one is your edit, I am happy to give credit. If I were Chloe, I would never have said that.