Where Have All the Bad Ass Women Gone?

There are too few bad ass women on television. And by “bad ass”, I mean strong, independent, confident women who are not defined by the men around them. Women that break down the Berlin Walls of stereotypes and bring some evenness to the unequal playing field of genders in Hollyweird.

I first had this horrible thought about six months ago when I saw The Hobbit: An Unexpected Journey in theaters on opening day. Now I know that there are not an overabundance of female characters in Tolkien’s secondary world, but in Peter Jackson’s film adaptation of The Lord of the Rings, he managed to provide strong roles for the women that did appear: namely, Liv Tyler, Miranda Otto, and Cate Blanchett. Upon hearing that Blanchett would be reprising her role of Galadriel, my heart did the happy cha-cha-cha. Cate Blanchett is perhaps my favorite actress alive, and in my imaginary world she and I are best friends.

The trilogy used her well, and Jackson gave Blanchett work to do. Remember that scene where Frodo offers her the One Ring, just because she’s Galadriel, which makes her the Middle-earth equivalent Oprah? And then she goes creepy and dark and bad ass, and Blanchett effectively makes you believe that she’d eat the hearts of small children?

The brilliant thing about Blanchett is that she goes from creepy-child-eating-Galadriel to regretful-and-repentant-Galadriel in 2.3 seconds flat. She’s fucking brilliant.

Oh wait, did you see her in The Hobbit?

I’m not sure what happened in the ten years since The Fellowship of the Ring was released, but somewhere along the way Peter Jackson forgot that women can and should do more than just stand there and look pretty. It was an incredible waste of an incredible actress.

And it’s not just The Hobbit. Across the board, the number of empowered and mighty women on screen is dwindling in favor of what I like to call the “Bella Cardboard Cutout.”

I’m not saying there are no powerful women left on television. Nikita is pretty bad ass, and so is Danaerys Targaryen. But, a majority of the powerful women are on HBO or Showtime or they’re just not as obvious on primetime television. It breaks my heart to see that we’re moving backwards. So, as a woman and a film/television watcher, I implore the creators of modern entertainment to take a good long look at what they’re doing to the female sex.

So, dear producers, directors, writers, and casting agents, let’s give our daughters some role models worth looking up to, like these bad ass women from past television shows:

This actress changed it all. The first African American woman to star in a major television series and on the command bridge like the smart intelligent bad ass she is, she made history again and broke down a few more racial walls by sharing an onscreen kiss with William Shatner in 1968. In addition to acting, she has used her celebrity power to work with NASA on recruiting women into their programs, because, hey, she’s already proven that women can kick ass in space. 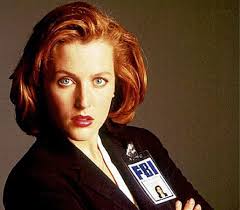 Scully is, without a doubt, an intelligent and capable woman. Not only is she constantly keeping Mulder in line, but she also approaches the unexplainable with a solid sense of logic. Scully saves Mulder’s ass a zillion times, and always remains as the emotional lifeline of the show. Without Scully, would I have given a flying rat’s ass about The X-Files? Probably not.

There are few women more bad ass than Xena. Originally a character written for a three-episode arch on Hercules, she became so popular that they wrote her own series about her quest for redemption for her past sins.

So this is a woman so fucking bad ass that she works for years to make up for her past life as a bad ass warlord.

Throw in some leather armor, a sword, and an infamous war cry, and there, my friends, is a terrifyingly powerful woman.

And she never needed no man to save her ass.

I grew up watching Buffy (much to the chagrin of my parentals, who thought my mind was better used reading Dostoevsky) and Buffy taught me some serious life lessons. 1. Women can save themselves and the world. 2. Being kick ass doesn’t mean you can’t be feminine. 3. Even if you can kick serious vampire butt, it’s better to do it with a friend by your side.

Yes, I know this is a pic of a man. But, Joss Whedon has done more for women on the big screen in the past two decades than, well, anyone else.

Joss Whedon is the biggest bad ass I know of. Why? Because he repeatedly takes the Hollywood formula, chops it the fuck up, and creates something way fucking better. He repeatedly writes incredibly bad ass women into his work, and they are never carbon copies of the same tired trope.

See a pattern? Not only does he write bad ass female characters, but he puts more than one on the same show. This has given Joss Whedon the unusual status in my world of “I’ll watch anything he fucking touches.”

So, yes, I’m disappointed by the way women can be portrayed (and because they keep cancelling Whedon’s television series), but Whedon brings hope that female portrayal on screen will change.

And he says it in better words than I ever could.